You are the Big Blind with 10BBs facing a shove for your tournament life – is this a simple spot to study and get right? If you answered yes, then you could be losing a lot of equity in MTTs. Using ICMIZER we are going to show you that a mistake that costs you a fraction of a buy-in in the early stages of a tournament could be costing you multiple buy-ins if you are near the endgame stages.

These spots may seem simple, but small errors compound when you do not understand ICM and these mistakes could be costing you a small fortune over the course of your poker career.

The Independent Chip Model (ICM) is a model which enables poker players to convert tournament chips into their real money equity value. That equity is in the form of a percentage of the remaining tournament prize pool. It impacts every decision, particularly late game decisions, in tournaments including the ranges you play, game selection, when to register and what a fair final table deal looks like.

ICM can also tell us how profitable or unprofitable a bet/call/fold is in a tournament in real money terms. ICMIZER is a powerful ICM calculator that quickly and accurately allows you to see just how much these decisions make or cost you every time you do them. It also has an MTT Coach feature that allows you to develop muscle memory for a good or bad call without it costing you money at the tables.

Thinking in these terms is a very costly mistake and stack depth is just one of many competing factors in play in an ICM decision. Some of the most costly unnoticed errors you will make will be short stack ICM decisions. They might seem quite small errors but because they happen when the money is most meaningful the scale of the error compounds. Getting these spots right is tremendously important and should make up one of your main areas for study. These are thankfully all errors you can quickly eliminate if you made studying with ICMIZER part of your regular routine.

ICMIZER 3 has a feature which shows just how significant a good or bad ICM decision is. If you have used the tool before you will have seen this but not noticed how relevant it is. It is the percentage of the prize pool feature that is shown under every single hand in the hand range grid. That little plus or minus below each hand:

Everyone knows that a + is good and a – is bad, just like we intuitively know that red means stop and green means play the hand. But what is this a plus or minus of? It reflects the percentage of the remaining prize pool you win or lose on average.

In the example above, AQs is +0.38 which means on average it will win 0.38% of the remaining prize pool. So if you are at the final table of the Sunday Million and there is $250,000 left to play for, AQs will make you $950 on average in the spot you find yourself in.

If you want you can change the setting on ICMIZER when you select the payout structure in the top left corner to display the actual money amounts rather than the percentage of the prize pool. You just need to manually input the remaining prize pool: 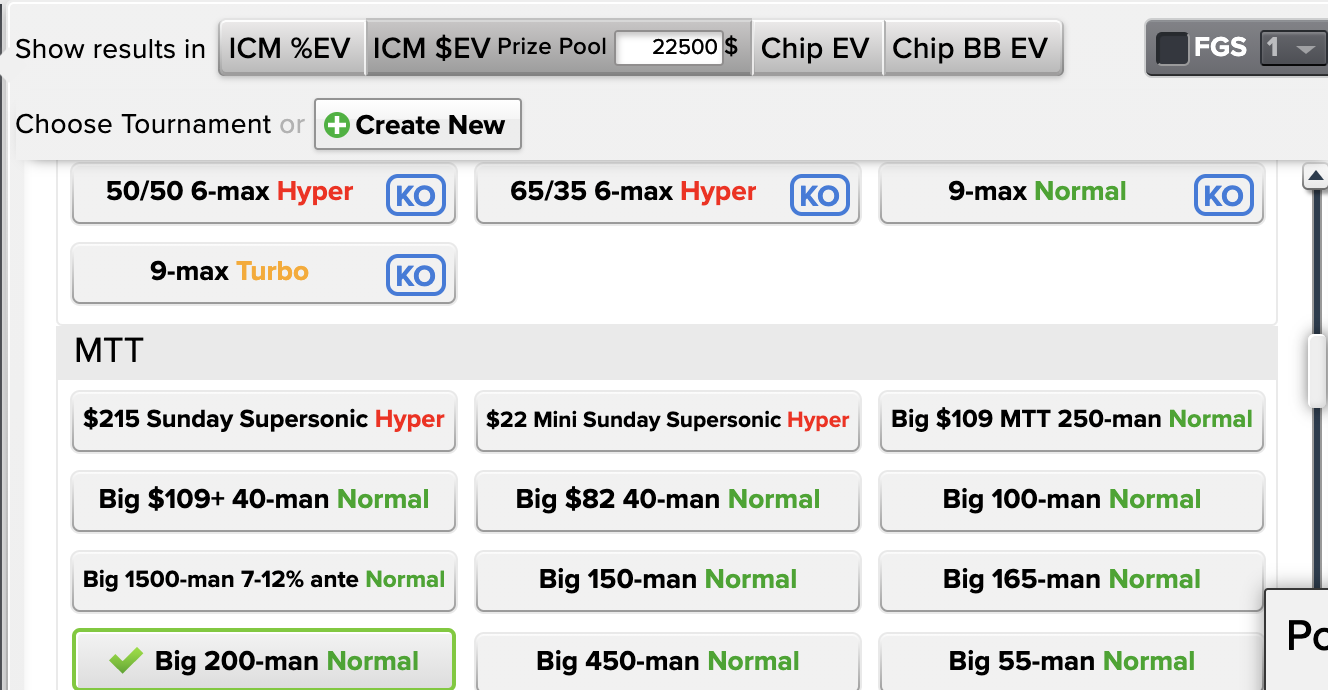 It’s probably better to stick to the percentages for the most part as it is a more objective metric, however if this is new to you it might make sense to use the $EV setting to begin with as it will make your jaw drop.

The biggest impact this metric has on your bottom line is when you make all-in calls for your tournament life. With a bet you often take down a small pot uncontested, so the average amount you win will be small. When you make a call for your life you are playing for at least twice your current stack and a whole lot more in equity.

Let’s say you are in a $55, 200 runner MTT with a standard PokerStars pay out structure. You can access this in ICMIZER using the ‘Big 200-man Normal’ preset payout structure. 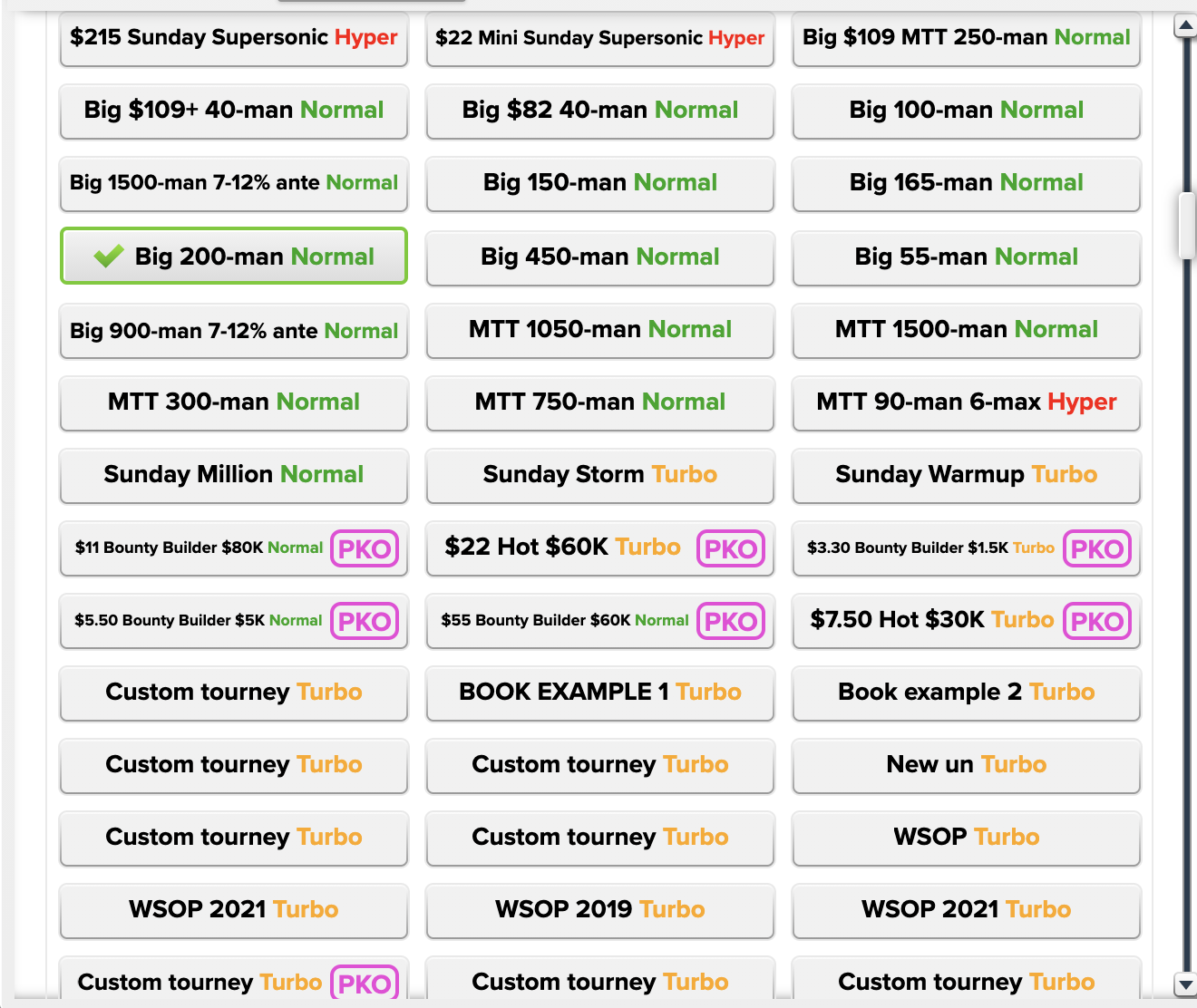 It’s still early in the tournament, 100 players have been eliminated, and you have been whittled down to 10 big blinds. The starting stacks were 10,000 and the average stack is now 20,000. The Button who covers you shoves on your Big Blind. Below is the spread of chip stacks and blind level, with MTT Mode selected to show 100 players remain: 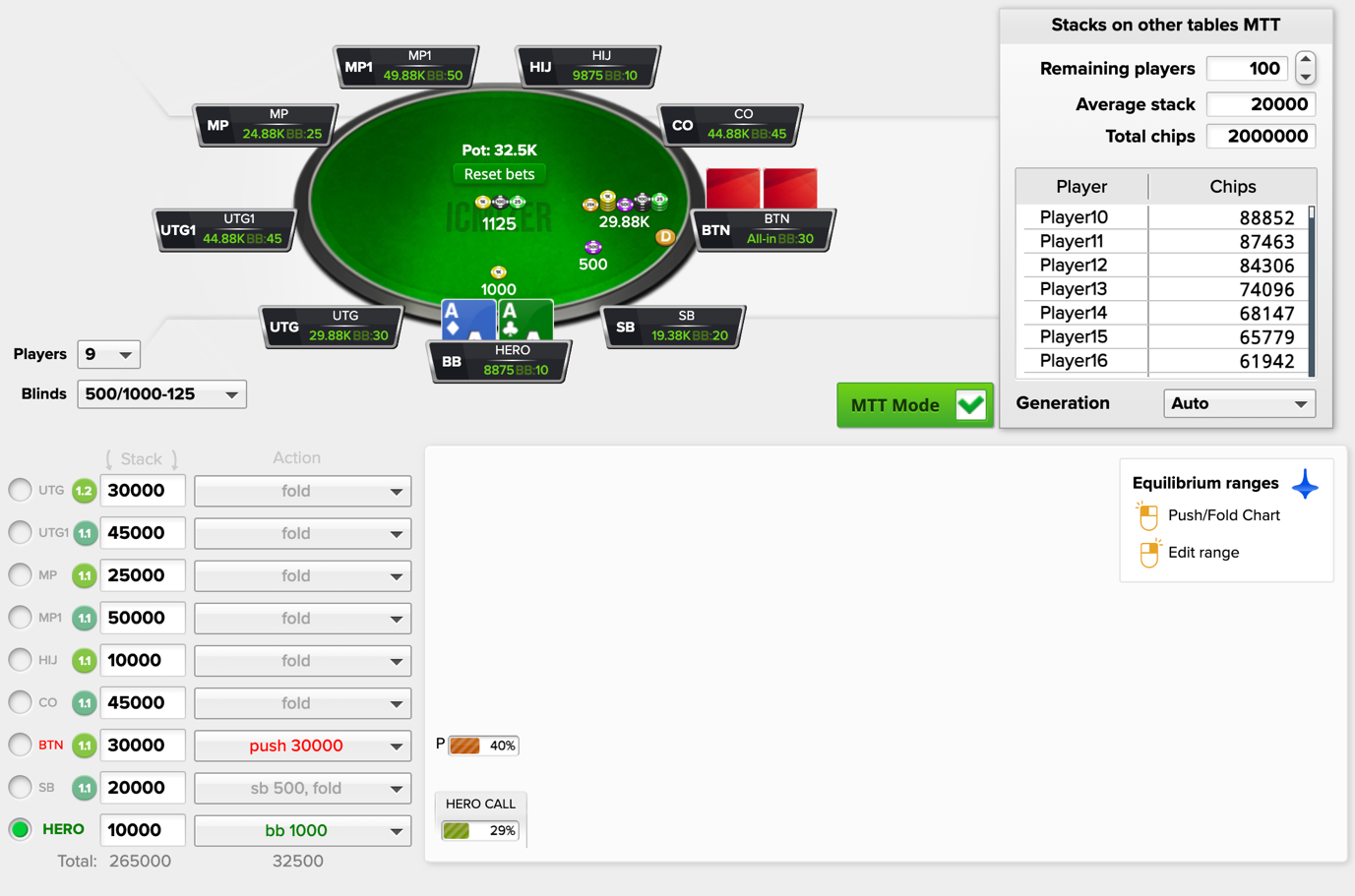 This is your calling range: 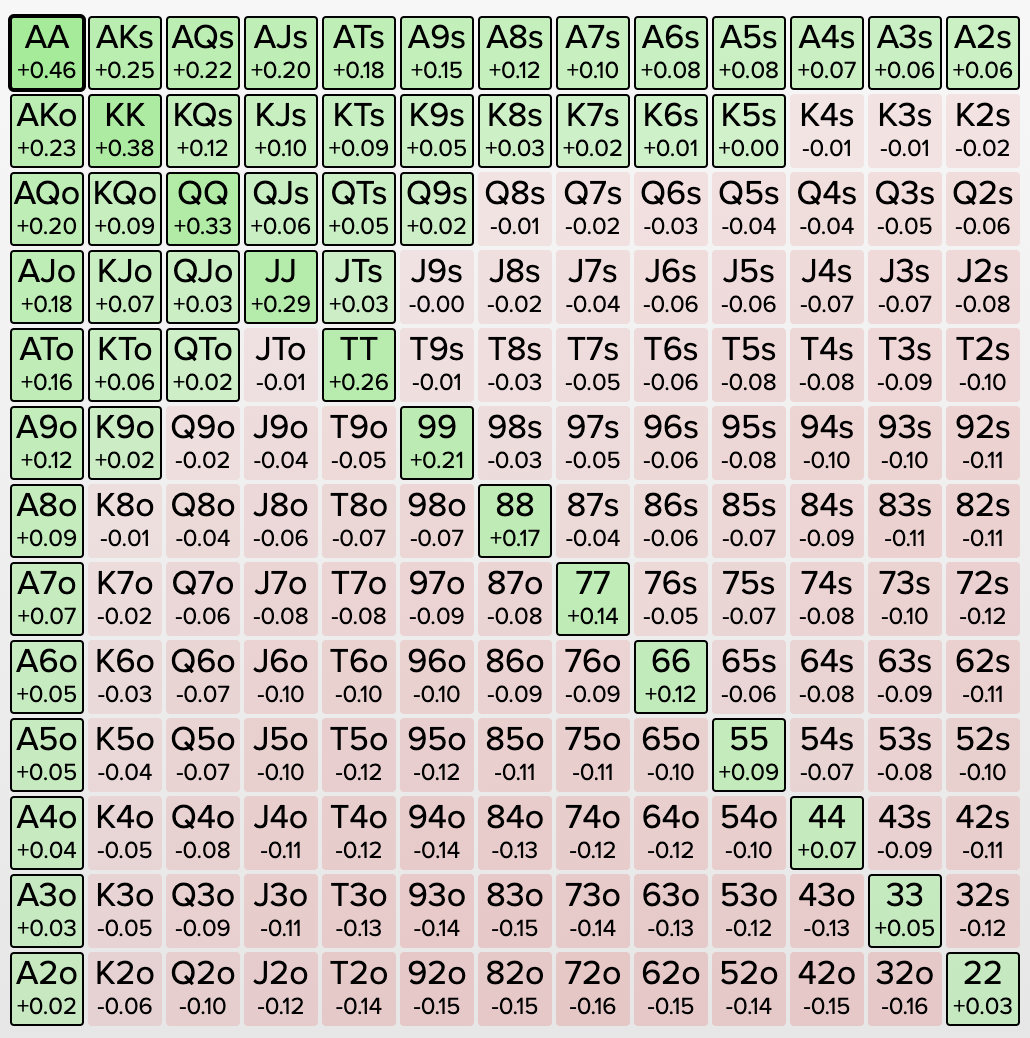 We’ll only do this once but if you do the same solve but use the ICM $ EV option, and input the total prize pool, which is $10,000 in this case, it will show you the actual money value of what each hand makes or loses you: 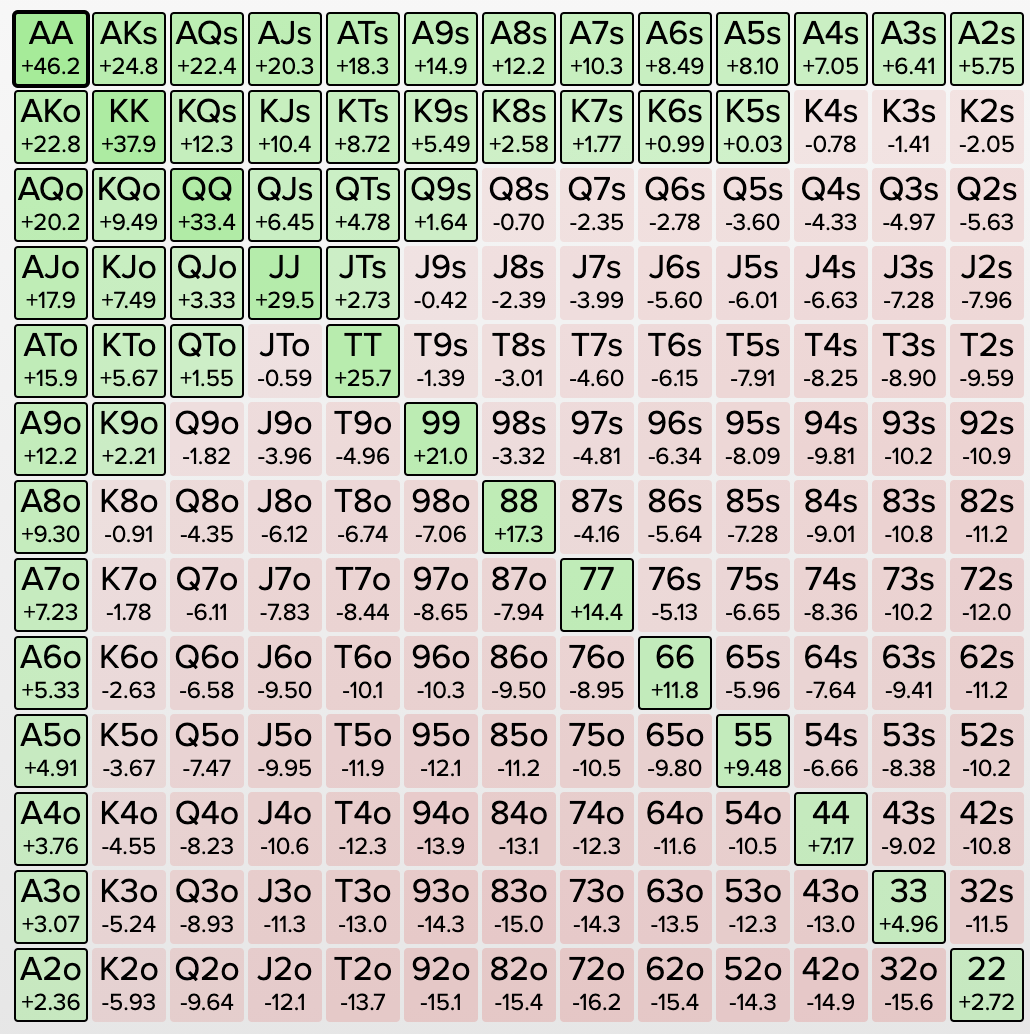 We recommend you use the ICM % EV option because it is more transferrable to any spot, particularly when you move up or down stakes. However, it is worth using this feature a few times just to emphasise the real money impact of your tournament decisions.

Let’s fast forward to the exact same spot, but on the literal bubble with 36 players left. I have tripled the stacks and blinds to reflect this, but in chip terms it’s the same spot. This is what the inputs look like, including now 36 remaining players in MTT Mode: 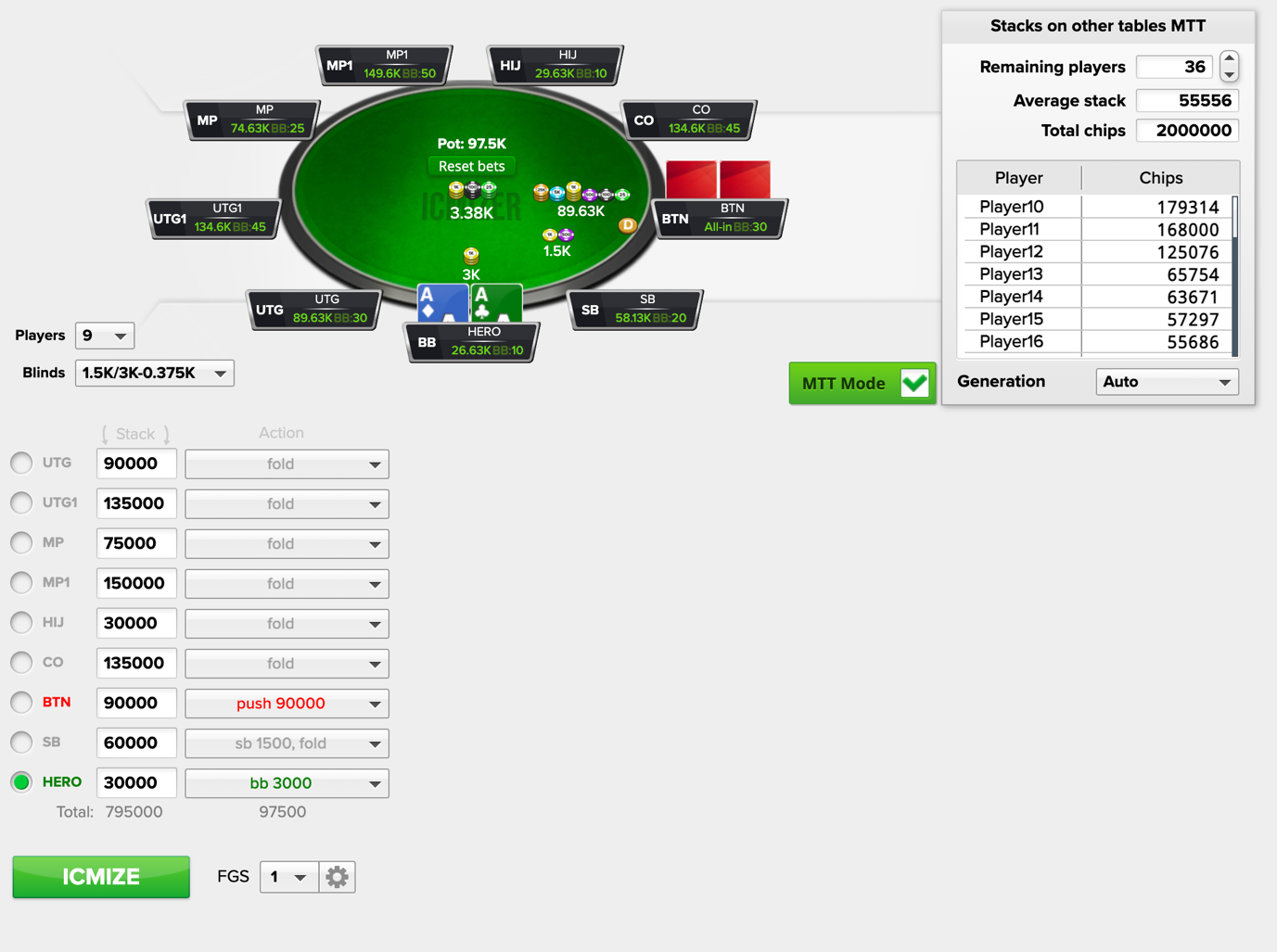 This is the calling range: 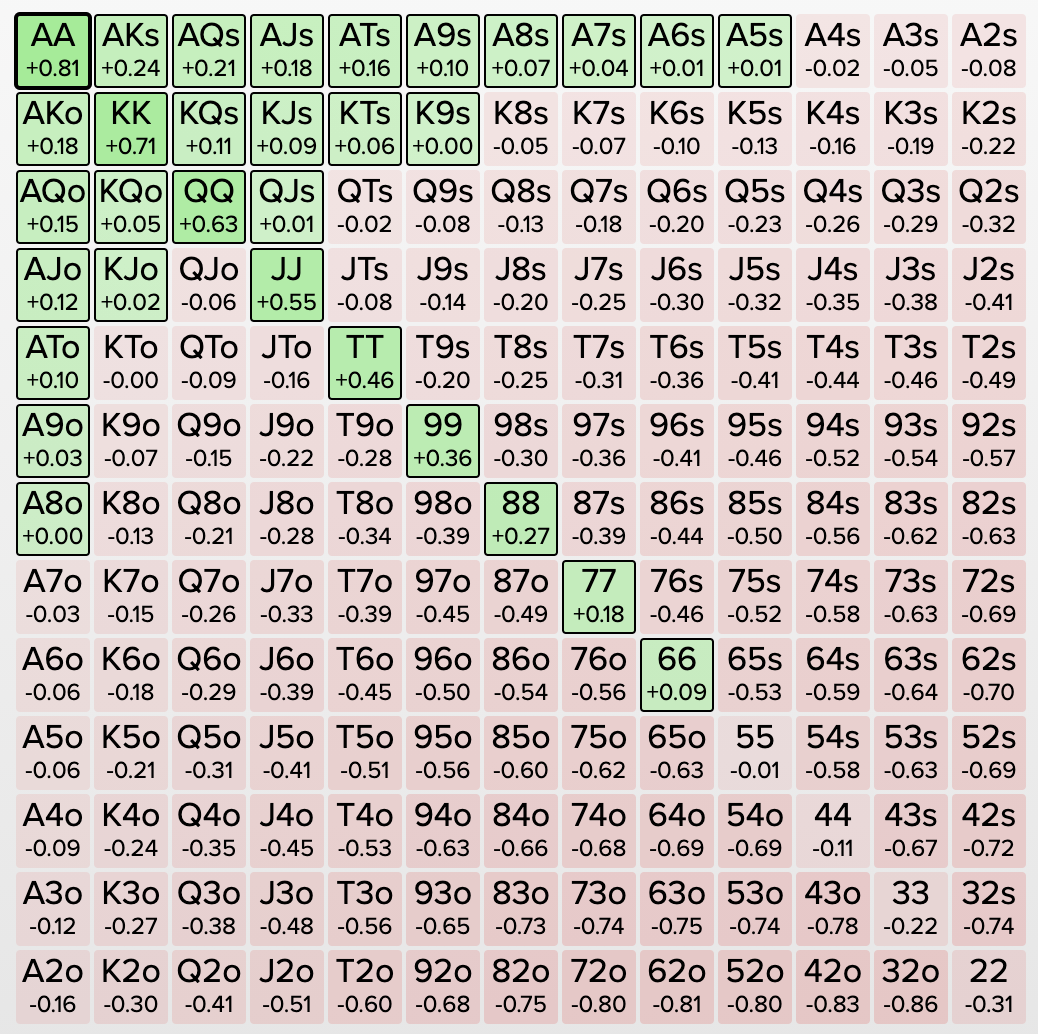 This is the same spot in terms of table make up and stack depths but look how much tighter the calling range is. A ‘correct’ call with 22 in the last example would make you 0.03% of the prize pool ($3) but making the same call on the bubble with the same hand costs you 0.31% of the prize pool ($31). While the overall percentage is small, the mistake is more than ten times as costly.

Maybe the most important thing to keep an eye on is the differences between a good and a bad call. When you see that an Ace with kicker problems like A9s makes you 0.10% ($10) on average here you might reason that a call with A2o isn’t that bad, but in reality that loses us 0.16% ($16). That’s a 0.26% swing between two hands you might consider similar.

People think the bubble is where ICM is most important and in a lot of ways it is, but let’s fast forward once again to the final table. Same spot, but we have rolled the blinds forward again and made everyone’s stacks bigger. It isn’t quite perfect as the total number of chips should equal 2 million (this equals 2.12 million) but I wanted to get the exact same number of big blinds in play with an actual blind level from the tournament.

We don’t have to use MTT Mode this time as it is at the final table: 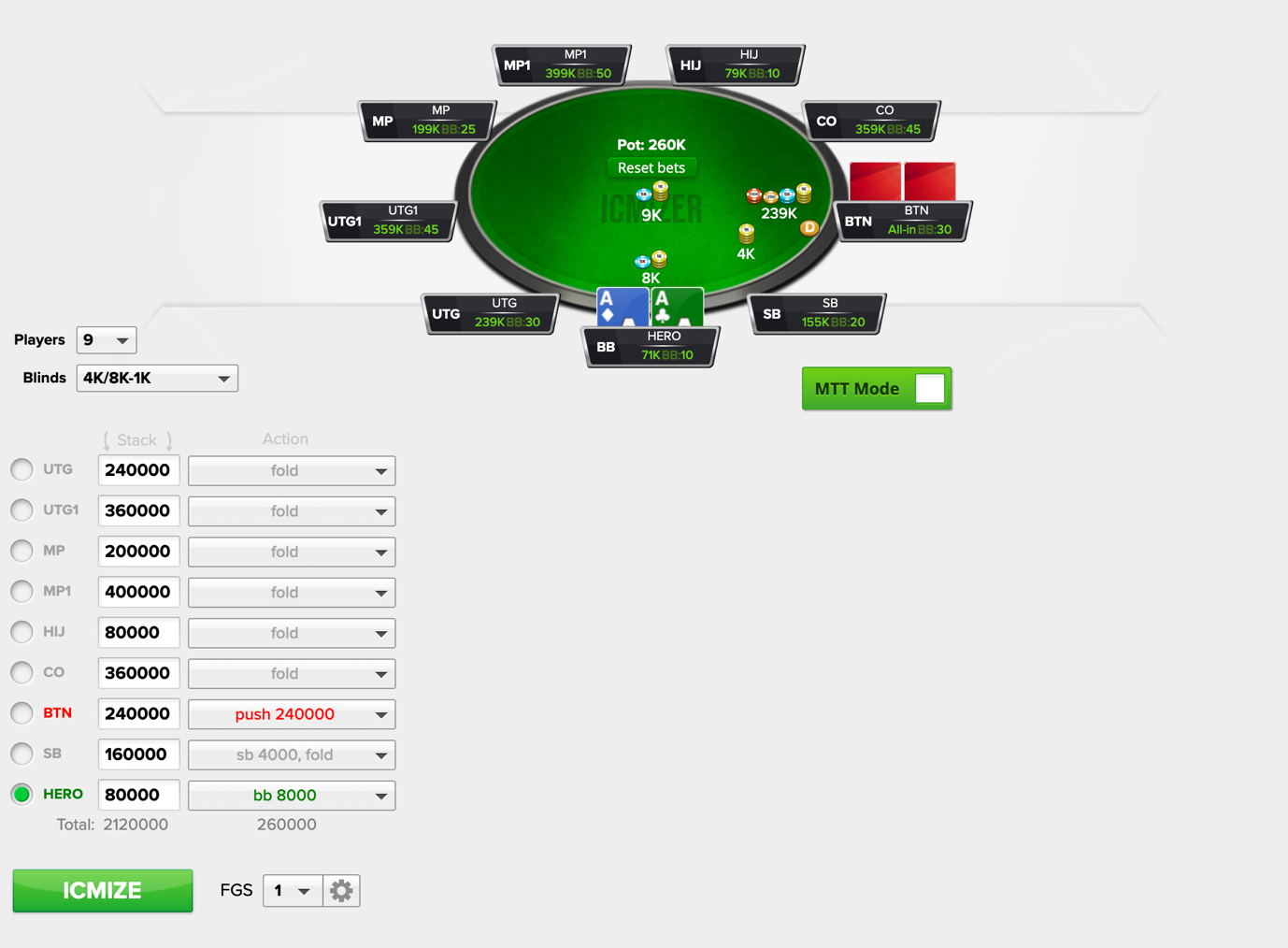 This is the new calling range: 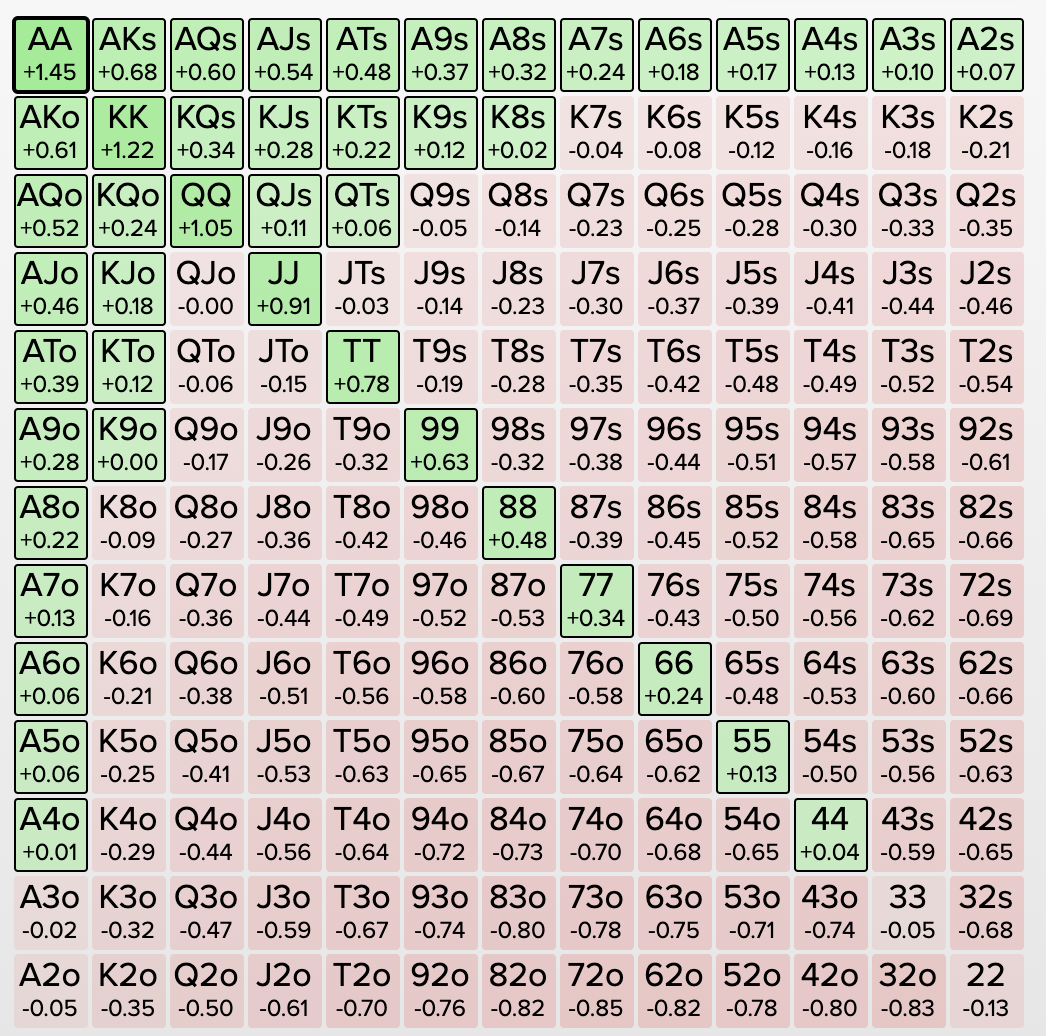 The calling range has widened because the bubble is over.

It is because you have already realised equity, meaning you have already guaranteed some money in the form of a min cash, as has everyone else. This is a misconception that players make with regards to final tables, they look at the payouts and think of what the top prizes mean to them personally. The top prize in this tournament is $1,832 but everyone is already guaranteed $267 (the 9th place payout) so they are actually eyeing up a first prize of $1,565. With every bust out you can play a little bit looser because you have already locked up equity.

This doesn’t mean that the final table is less important. The examples so far have been in 200 runner tournaments but there are so many MTTs these days that have closer to 1,000 runners and in a handful of cases tens of thousands. Let’s look at this same example but assume 1,050 runners instead of 200. We have kept the same number of chips in play but used the 1,050 generic PokerStars payout structure instead from the ICMIZER preset payouts:

These are the calling ranges: 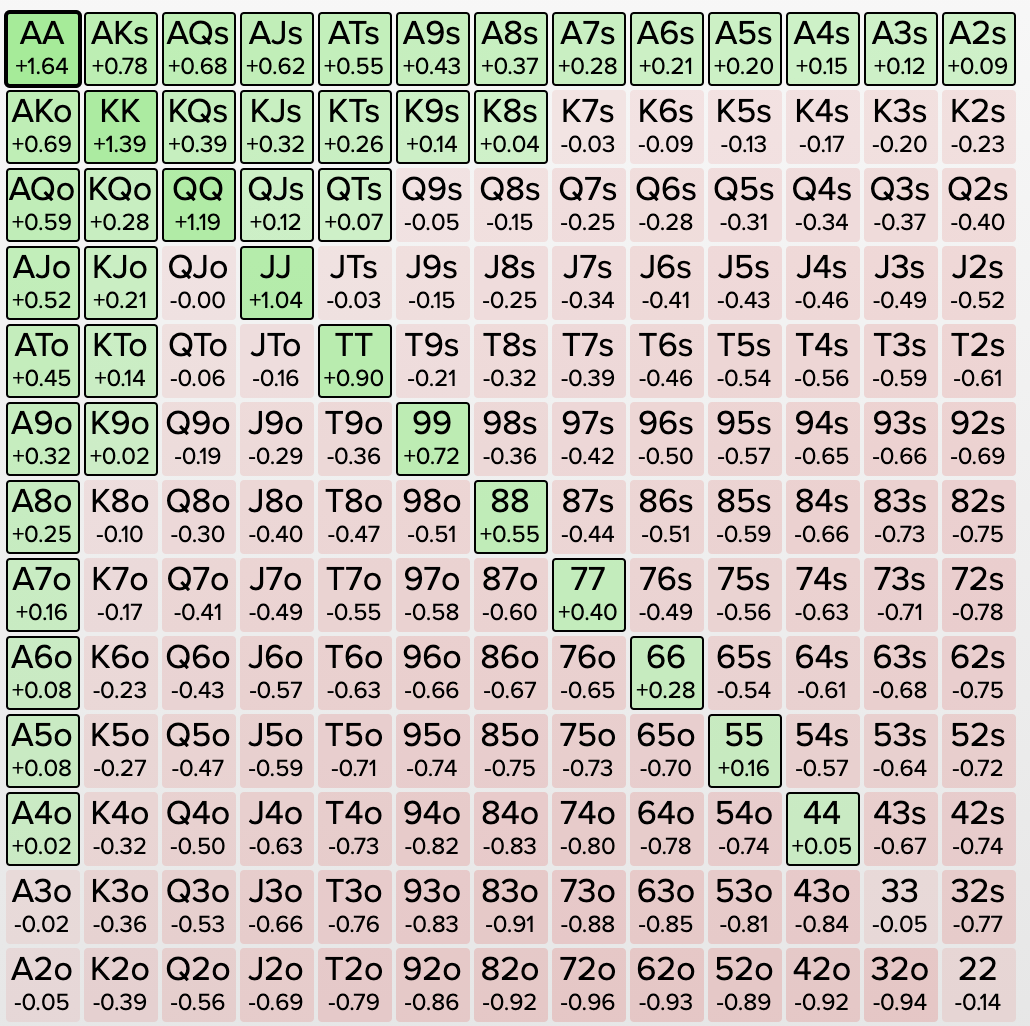 The ranges are identical and they only vary slightly in terms of percentage profitability because of the slightly different payout structure. The prize pool, however, is now much larger it is $36,457.57 being played for at the final table (it was $57,750 overall before the mincashes).

If you saw that K9o is profitable (0.02%) so you reasoned that J9o (0.29%) was reasonable considering it more easily makes a straight, that 0.31% swing would cost you $113.30. A seemingly ‘small’ error actually costs you two buy-ins of equity.
It may seem obvious that the same mistake with a bigger prize pool will cost you more equity, but just imagine if you found yourself at the final table of a once-in-a-lifetime MTT like the Sunday Million or a WCOOP and you made these types of errors. You could be looking at something in the magnitude of 10 or 20 buy-in mistakes.

Repeat mistakes add up together quickly

If you routinely find yourself at final tables with meaningful money like this, just imagine how much money you would save by eliminating these errors from your game. Not only can you look at hands you previously played in ICMIZER to see the true cost of an error, there is also the MTT Coach feature where you can play thousands of push/fold spots for every common tournament payout structure. You can make these errors, and correct them, without it costing you anything other than the monthly subscription. You’ll develop a strong muscle memory that will make these spots much easier to play.

It is probably clear that if ICMIZER saved you from making a one buy-in error in a midstakes game it is worth the monthly subscription price alone. If it stops you from making an ‘ICM punt’ on a huge final table you can probably justify the cost of an annual package. If you grind a lot of smaller MTTs those small 0.05% of prize pool errors also add up to a similar aggregate benefit across more tournaments too. Whether you make a $200 error once every six months or a $5 error 20 times a month, you can easily see how the benefits of ICMIZER will compound over time.

One final note and that is if you are in doubt what spots to study, studying your calling ranges is the best place to start. The biggest equity decisions and thus the biggest equity mistakes you potentially make are all calls. That goes double when it is calls on the bubble, final table bubble or at the final table itself. A bad call can haunt you for a long time and fixing this one area of your ICM game will have a huge impact on your winrate.

Some users can experience issues with launching the browser version of ICMIZER. We are aware of the problem, and we will resolve this issue as soon as possible. If you faced the issue, please try following the described solutions from this article.