What is the card removal effect?

When we’re thinking about opening with an all-in, we’re considering two possible scenarios. In scenario A, we get called by one or more opponents. In scenario B, the players to the left of us fold and we steal the blinds.

In scenario A, when someone calls, the strength of our hand begins to matter. Having the stronger hand always helps. However, calls are often made with a narrower range than pushes, so it’s likely that the caller has a stronger hand than we do. This means that, unless our hand is at the top of our push range, most of the time we don’t want to get called.

In scenario B, when all our opponents fold, our hand strength doesn’t make a difference – we’re not going to show it. What we care about is the odds of getting called, and these odds depend on the kinds of hole cards we push with.

As many players intuitively know, pushing with A2o effectively blocks one of the four aces for our opponents. This means we’re less likely to get called by an opponent potentially holding two aces, as compared to pushing with something like 32о.

The good thing is that ICMIZER is aware of the card removal effect and factors it into its calculations.

The odds of an opponent calling are rarely the same as his pure range, or unqualified range when calling, because the hero’s hand always has an impact on it. The card removal effect is considered in 2-way and 3-way spots, when we’re calculating the odds of getting one or two calls after we’ve pushed (in ICMIZER’s terminology these are referred to as call and overcall, respectively).

When you call, you have no way of winning the pot outright, without showing your hole cards. This explains why the caller’s range is narrower than the pusher’s. This is an instance of the Gap Concept, which states that the opening player’s range is weaker than the ranges of those to the left of him.

The Gap Concept applies when the players have similar-sized stacks. When they don’t, the caller’s range may be wider than the pusher’s, as the caller has very beneficial pot odds because of the posted blinds.

What is pure range (unqualified range)?

Pure range, or unqualified range, is a range that applies to the full 52-card deck. For example, the odds of getting a pocket pair from the full deck are exactly 0.45%; 0.3% for two suited cards; and 0.9% for two off-suit cards. 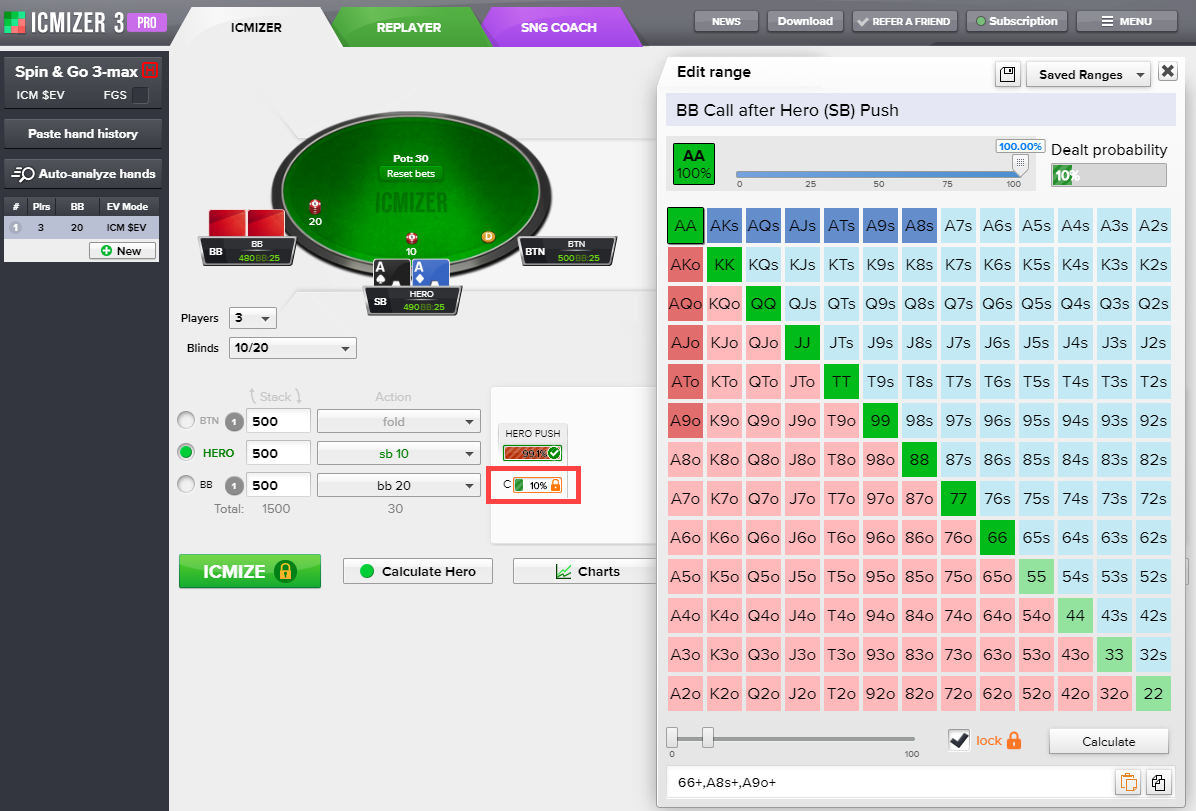 This is composed of:

How this works in ICMIZER

At the table we’re never actually interacting with the full 52-card deck. Let’s say we’re the SB, we go all in, and we think the BB is going to call if they hit one of the top 10% of hands. Then we need to realize that the odds of the BB getting a hand in that range partially depends on our hand, too. If our cards overlap with theirs, this will modify the probabilities within their range.

For example, if we’re holding AA and our opponent has a strong calling range, then we can benefit from knowing that two aces have been removed from the deck. That’s two aces (out of four) that they cannot be holding. This makes the opponent less likely to call, and in turn makes our push more viable.

If we have a weak hand like 32о, we’ve removed two cards from the deck again, but this time it’s two weak cards. The BB is dealing with a 50-card deck (no pun intended) that is slightly better quality than the full 52-card deck. This somewhat increases their odds of hitting that top 10% range, because the deck has more cards they want and fewer cards they don’t.

ICMIZER factors the card removal effect into its calculations affecting players to the left of the player who has pushed or raised. It takes into account how the range of the pusher has effectively modified the deck for the next acting players. ICMIZER knows that the first potential caller’s effective deck is modified by the pusher, and then the potential overcaller’s effective deck is modified by both the pusher and the caller. So just in case you’re wondering “Are ICMIZER’s calculations accurate?”, you can rest assured they are.