There are good ways to use ICMIZER and there are bad ones. By avoiding the typical mistakes, you can not only save time but also ensure you’re making the best decisions in the tournaments you play.

Without further ado, here are the six biggest traps you should never fall into after you’re done reading.

Chip EV is a simplified analysis mode, because when the player folds, their fold equity does not depend on their opponents’ actions -- it is simply equal to their stack size. When you select Chip EV mode for any tournament, ICMIZER calculates everything in chips only, ignoring tournaments payouts and knockout bounties. The calculations are performed in chips based on normal pot odds, like in a cash game.

Solution? Use ICM %EV or ICM $EV instead.

Chip EV calculations produce inaccurate results for multitable tournaments. This effect is less pronounced for large tournaments and their very early stages. But if a regular MTT starts with a field of less than 500, or if it has fewer than 500 players at some point (2,500 for Progressive Knockout tournaments), you should definitely opt for МТТ tournament type with ICM. This will allow you to craft a far more accurate strategy than with Chip EV.

Preflop: Hero is on the BTN with 99

Here is the result of a Chip EV calculation for this situation:

As you can see, the Chip EV model ignores the tournament payout structure and the specifics of this tournament stage. It recommends calling the short-stacked MP’s push on the bubble with 99. 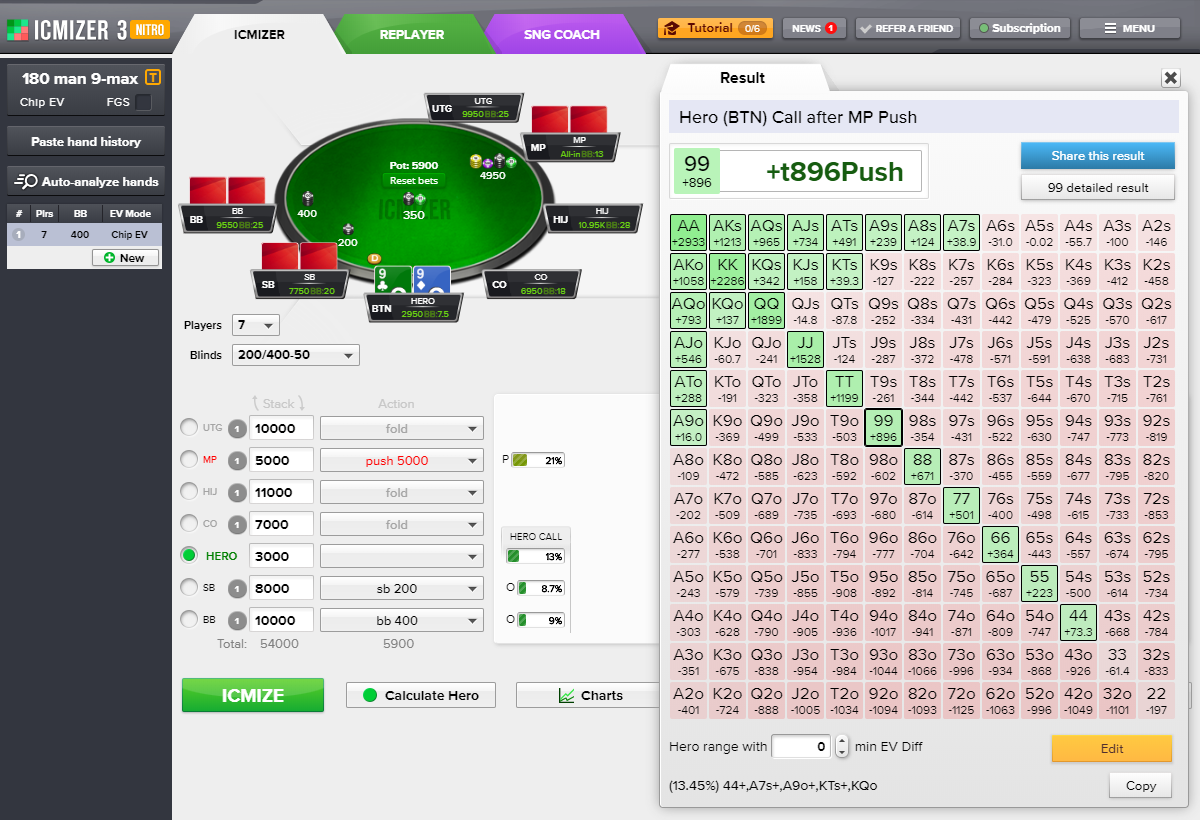 Now let’s do another calculation with ICM $EV. We set the prize pool to $810, select МТТ mode and enter 28 players remaining.

Here is the result of that ICM $EV calculation:
https://www.icmpoker.com/icmizer/#StvzJb 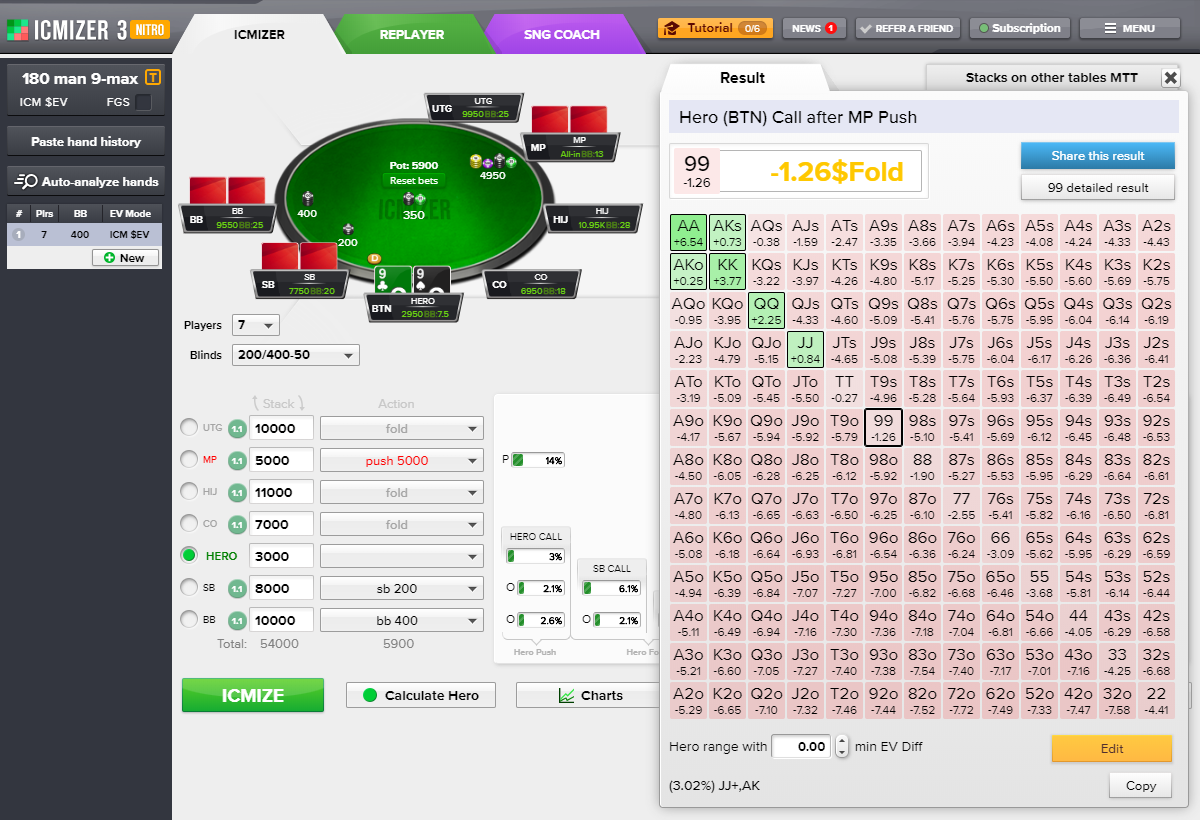 The ICM-based calculations fully and accurately reflect the tournament context and our intuitive expectations. That is, on the bubble we don’t have enough equity to call with 99; instead we should fold and keep our chances of finishing in the money, among the top 27.

The ICM algorithm is a mathematical function of two variables – payout structure and player stack sizes. Knowing these inputs is enough to determine one’s ICM EV. But if you enter one of these crucial inputs incorrectly – the tournament’s payout structure – then the calculation results will be off.

The ICM algorithm accepts as input two arrays, or sets, of numbers: one with the prize amounts for each paid place, and the other with the players’ stack sizes. The outcome is another set of numbers which stand for each player’s tournament equity.
To calculate a tournament hand accurately, it is very important to select the right tournament payout structure and whether it has bounties (regular tournament, bounty tournament, or progressive bounty tournament).

ICMIZER comes with most poker rooms’ popular tournament structures available for you to choose from. If it doesn’t have the tournament type you need to analyze, you can easily create a custom tournament.

Let’s look at a typical example of a calculation performed with the wrong tournament structure.

Preflop: Hero is on the SB with AJs

This is the table ICMIZER generates: 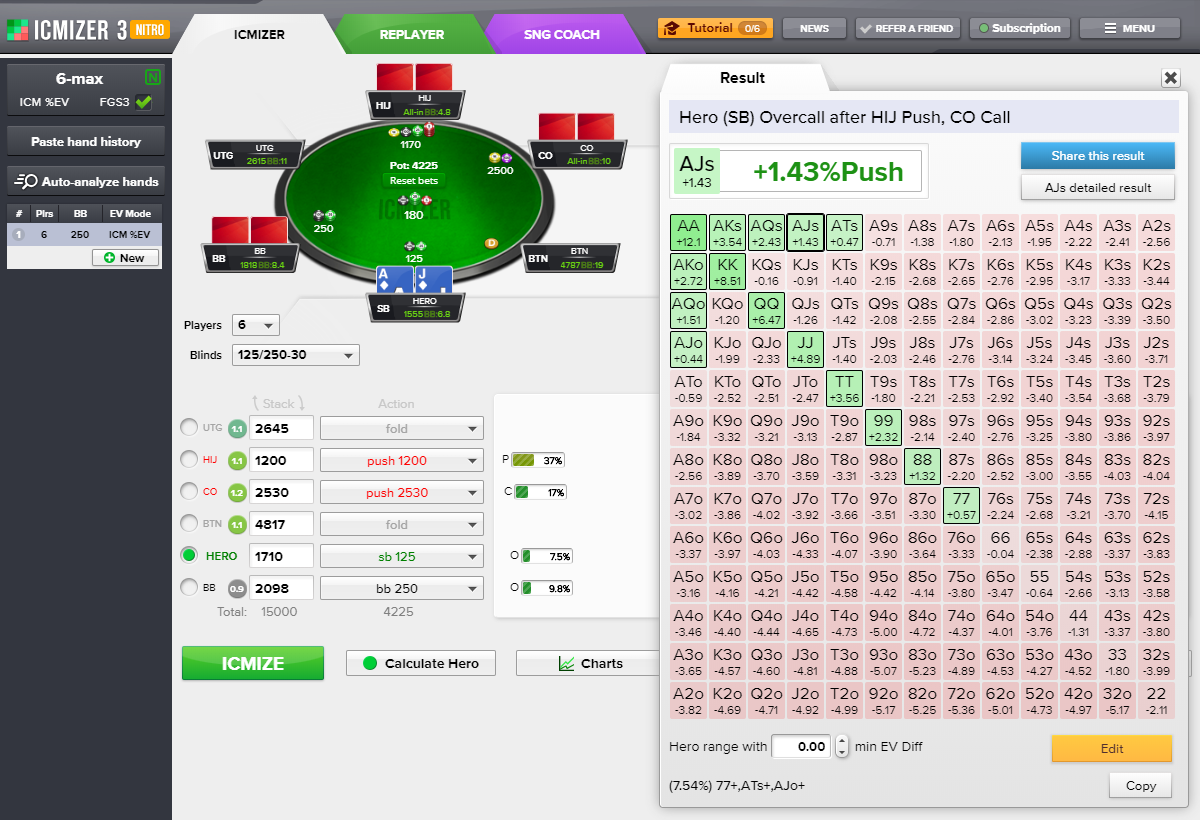 We can see that the Hero’s calling range against the two pushes from HIJ and CO is 7.5%, and the profit of his AJs call is displayed as +1.43% of the prize fool.

Note, however, that we did not choose the appropriate tournament payout structure before running this calculation. This means ICMIZER did the numbers for a 6-max SNG, where there are just two prizes, for first and second places. 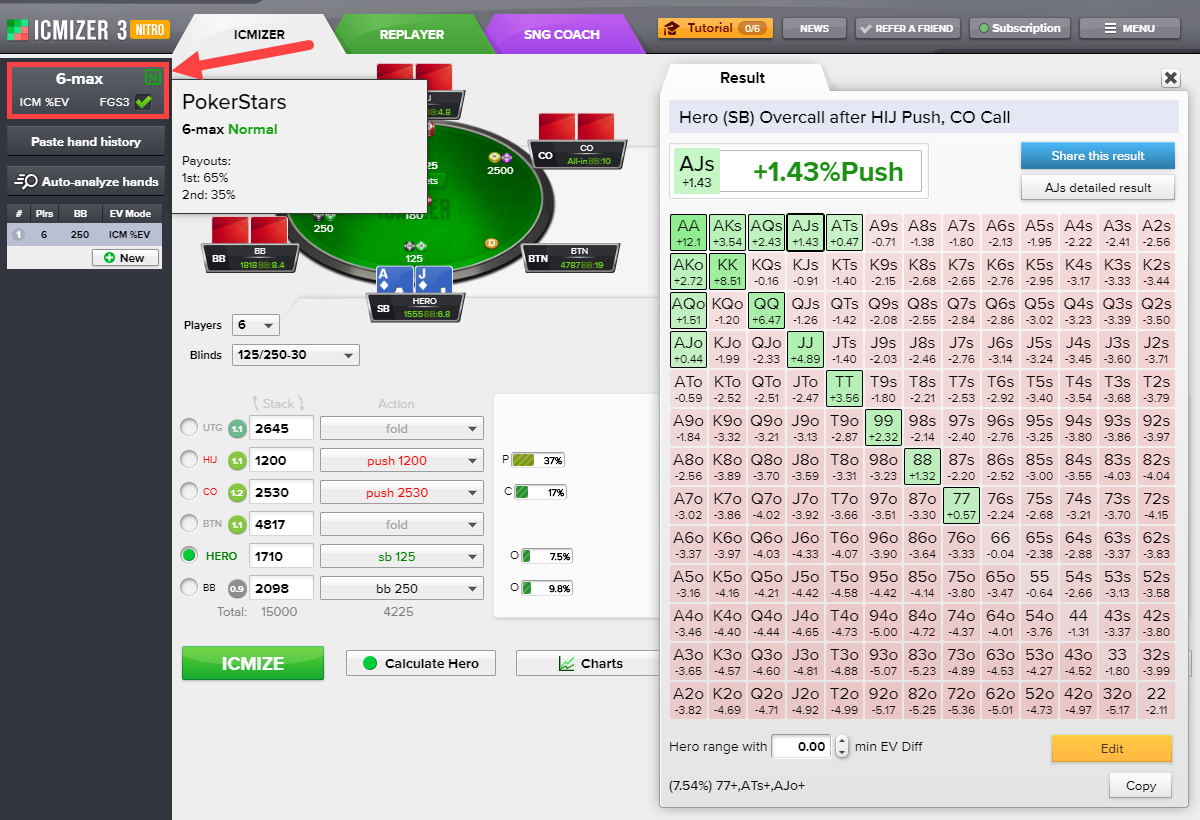 Let’s choose the correct structure – Fifty50 10-max Turbo – and see what the results look like this time: 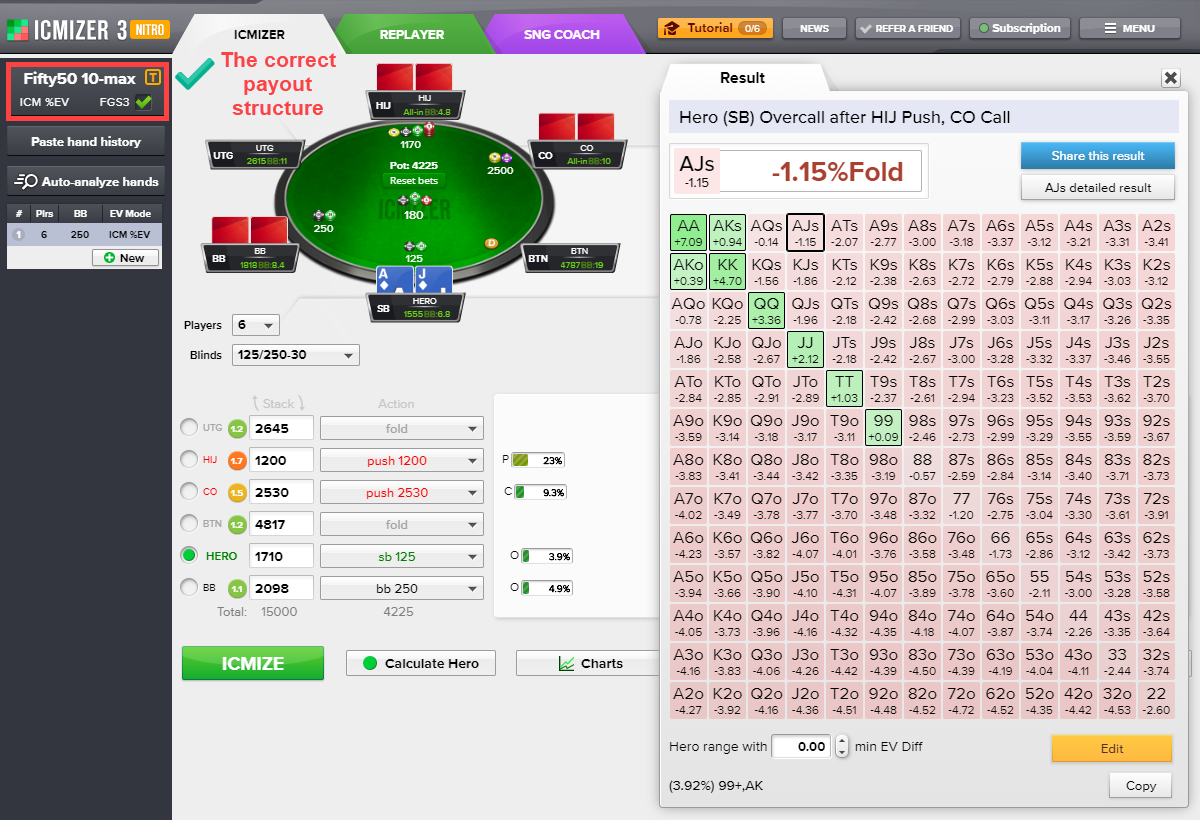 With the right structure taken into account, the Hero’s optimal range when calling two pushes from HIJ and CO is 3.9% – not 7.5% as previously calculated. What’s more, the profit of their call is actually negative at –1.15% of the tournament prize pool.

We hope this comparison makes it clear how choosing the wrong tournament payout structure can lead you astray.

Let’s consider one more example. Say, you are calculating a hand from an МТТ and the list of preset payout structures doesn’t have any that match your МТТ. If this happens, you should create a custom tournament type to ensure ICMIZER gives you the most accurate calculations and advice.

But for purposes of this post, let’s see what happens if you don’t. We’ll create a hand from a tournament with 936 players, starting stack of 10,000, and the following payouts for places 1 through 188:

By the time this hand was played, there were 190 players remaining.

Preflop: Hero on the BB with TT

Instead of creating a custom tournament type, we choose one of the available preset payout structures that partially matches the tournament size – 1050-man Normal.

Here’s what we get:
https://www.icmpoker.com/icmizer/#WKMRao 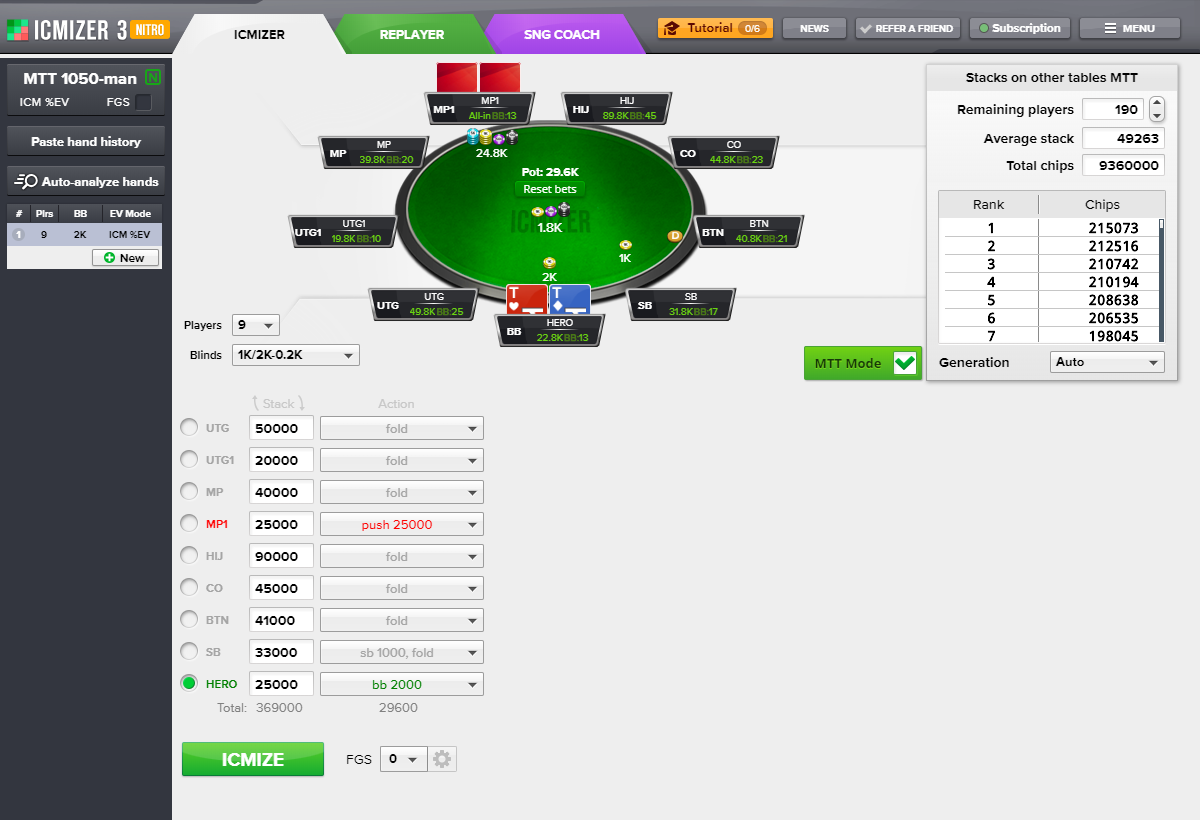 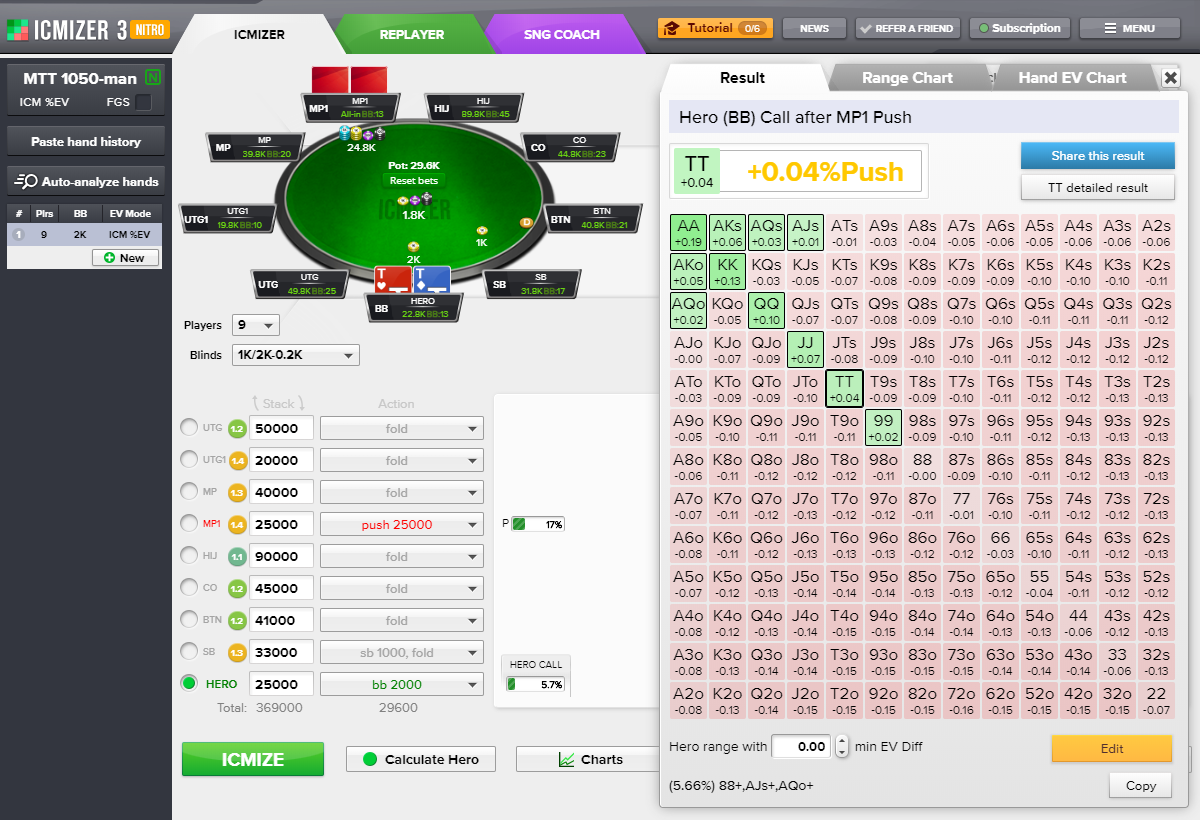 Now let’s remember our tournament pays 188 top places, not 135 like this preset 1050-man Normal tournament does. 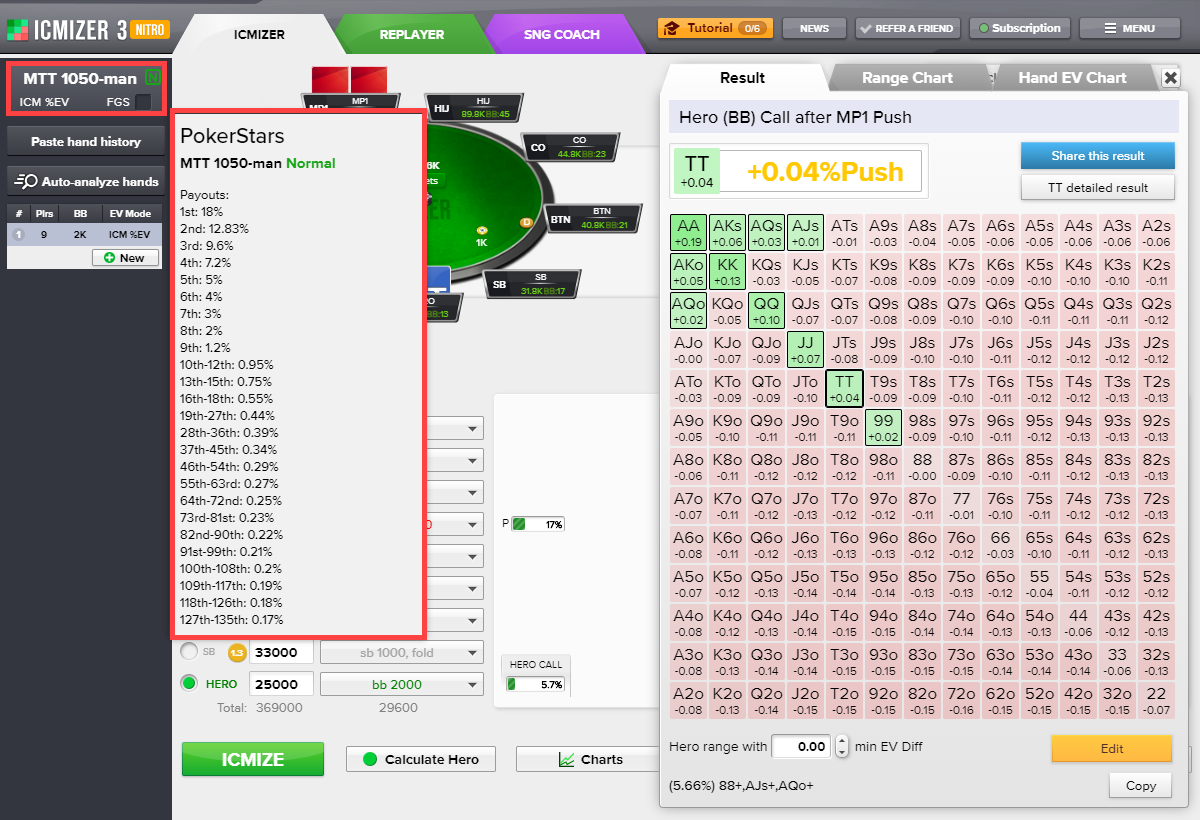 Let’s create a new tournament type to reflect this payout structure and see if that changes anything:
https://www.icmpoker.com/icmizer/#WBMgXA 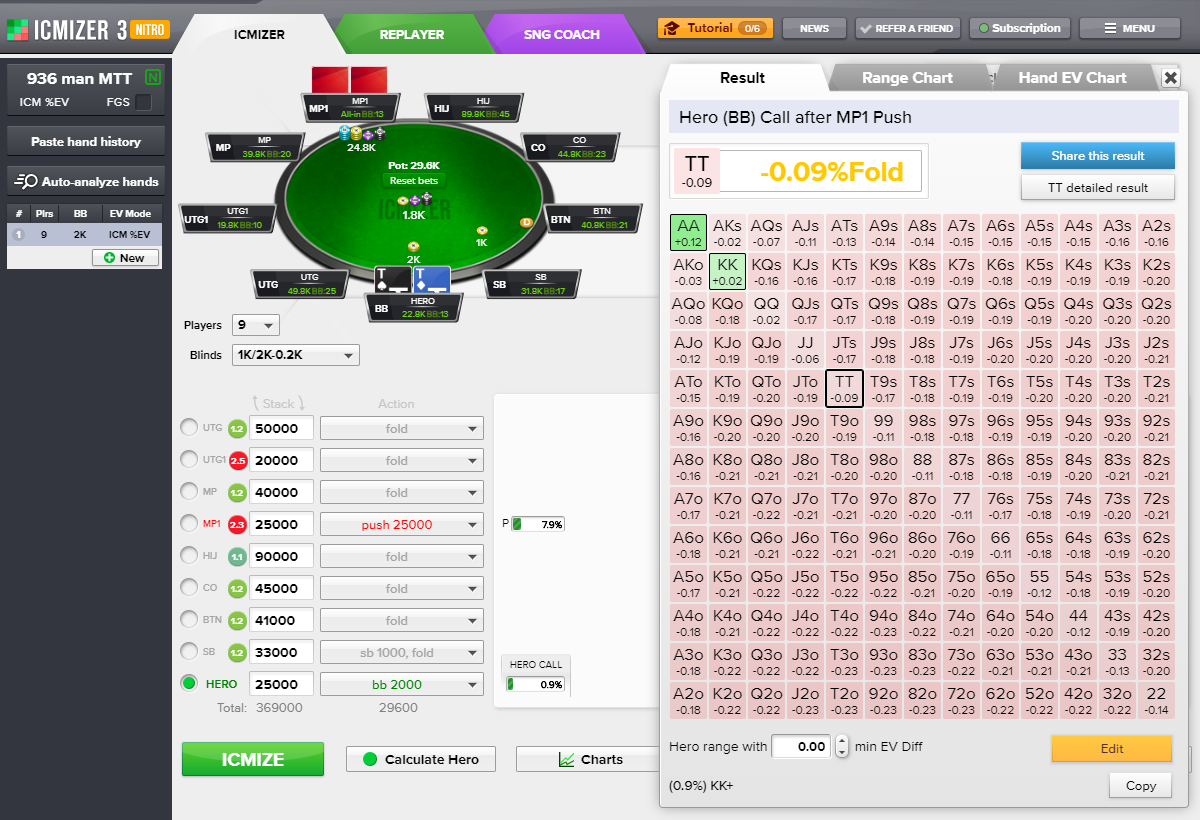 We see that the Hero’s true range for calling MP1’s push is 0.9% – not 5.7% as previously calculated, while the profit of their call is actually negative at –0.09% of the prize pool.

This ICM-based calculation result is in line with our intuitive understanding of the tournament situation. At the bubble stage, the Hero just doesn’t have enough equity to call with TT; they should better fold and keep their chances of finishing in the money.

3. Not using МТТ mode when loading a hands history from an MTT

When you load a hands history from an MTT you’ve played, you should do so using MTT mode. If you don’t, ICMIZER will assume that either your hand is being played at the final table of an MTT or in a single-table SNG.
Even if you’re only loading one or two hands from an MTT and not the whole tournament, you should still use MTT mode.
If you’ve loaded a whole MTT to analyze it automatically but you did not enable MTT mode, ICMIZER will think you’re analyzing just the final table of the tournament. It will then consider the final payouts in all hands as those of the final table, even if the hand was played at an earlier stage. And if you enable MTT mode for one of these hands, the МТТ control window will still be missing important information about the tournament for the stage in which the hand was played. This, again, can lead to misleading calculations.

We’ve loaded a tournament to automatically analyze but did not enable МТТ mode. Here is the calculation result: 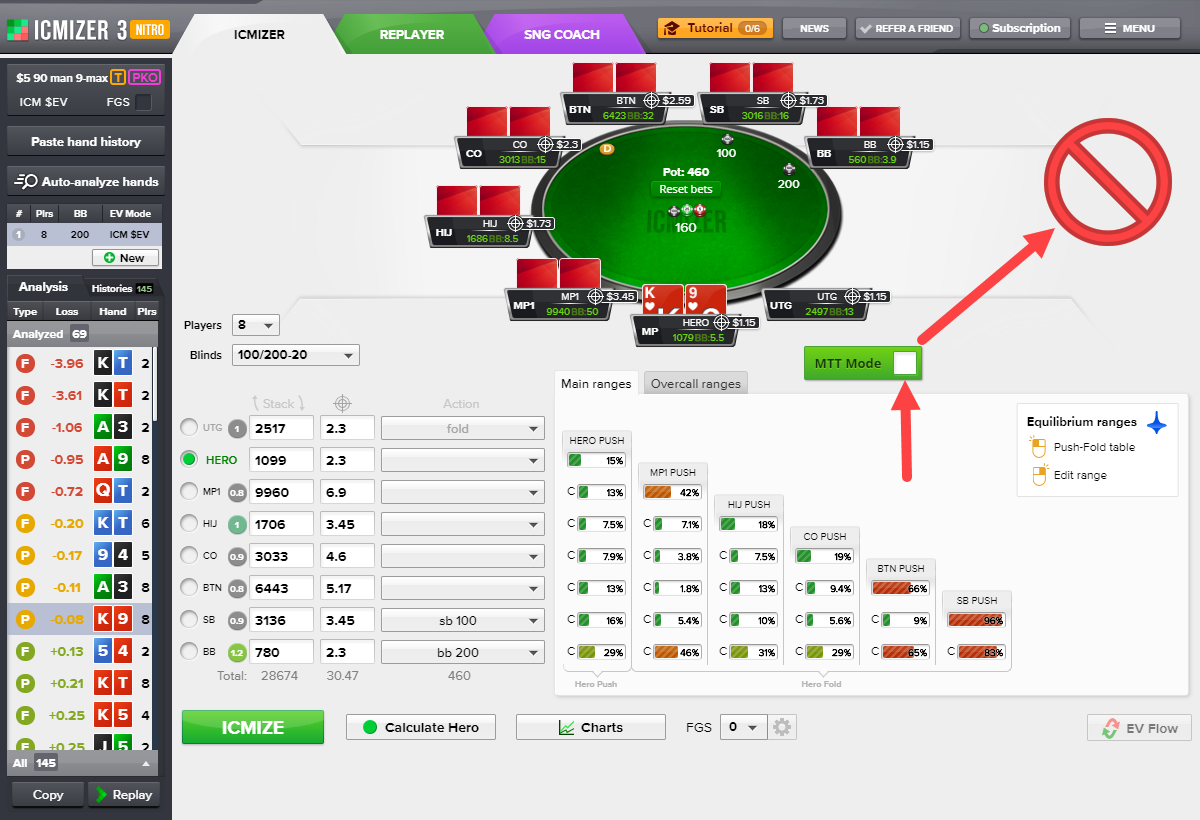 This is what happens if we enable MTT mode just for this one hand: 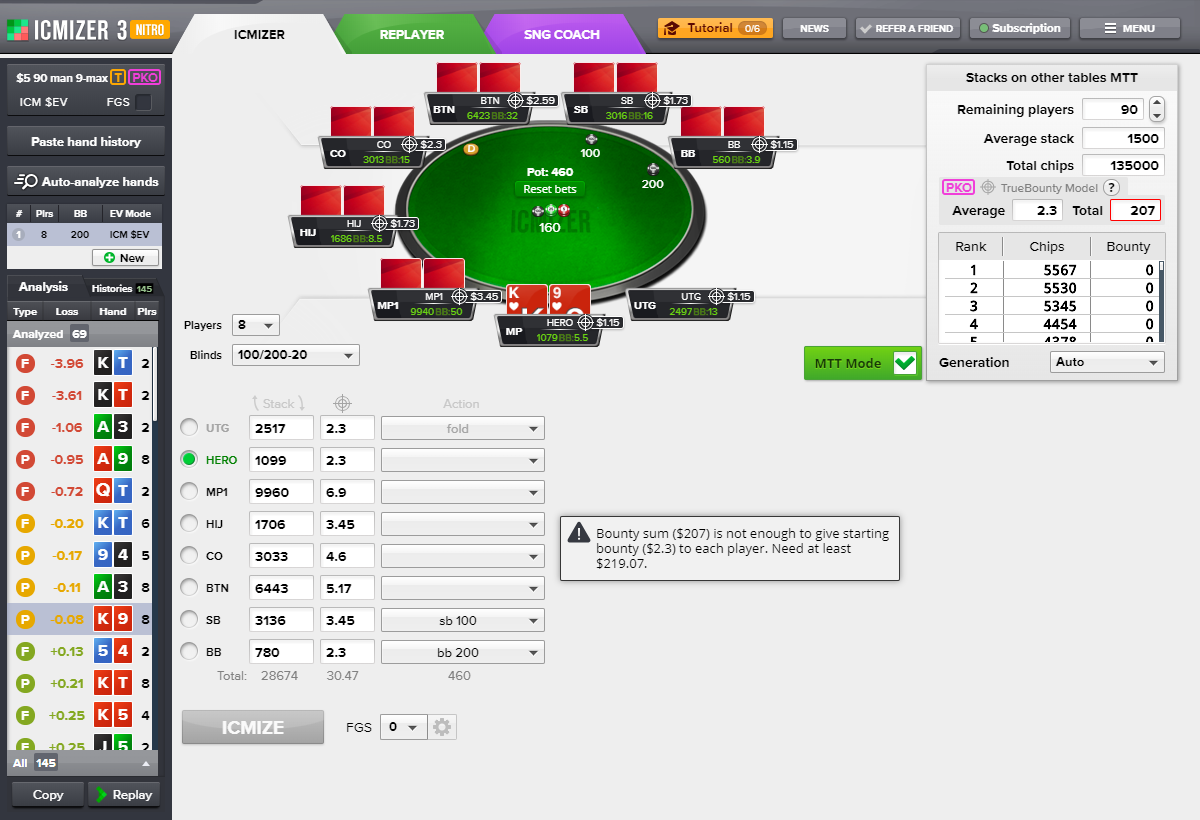 Now, if we had enabled MTT mode when loading the tournament, then each hand would have been processed based on the actual tournament stage in which it was played. The stacks of all players at the other tables would be factored in ICMIZER’s calculations.

Here is what the results would look like if we had done that: 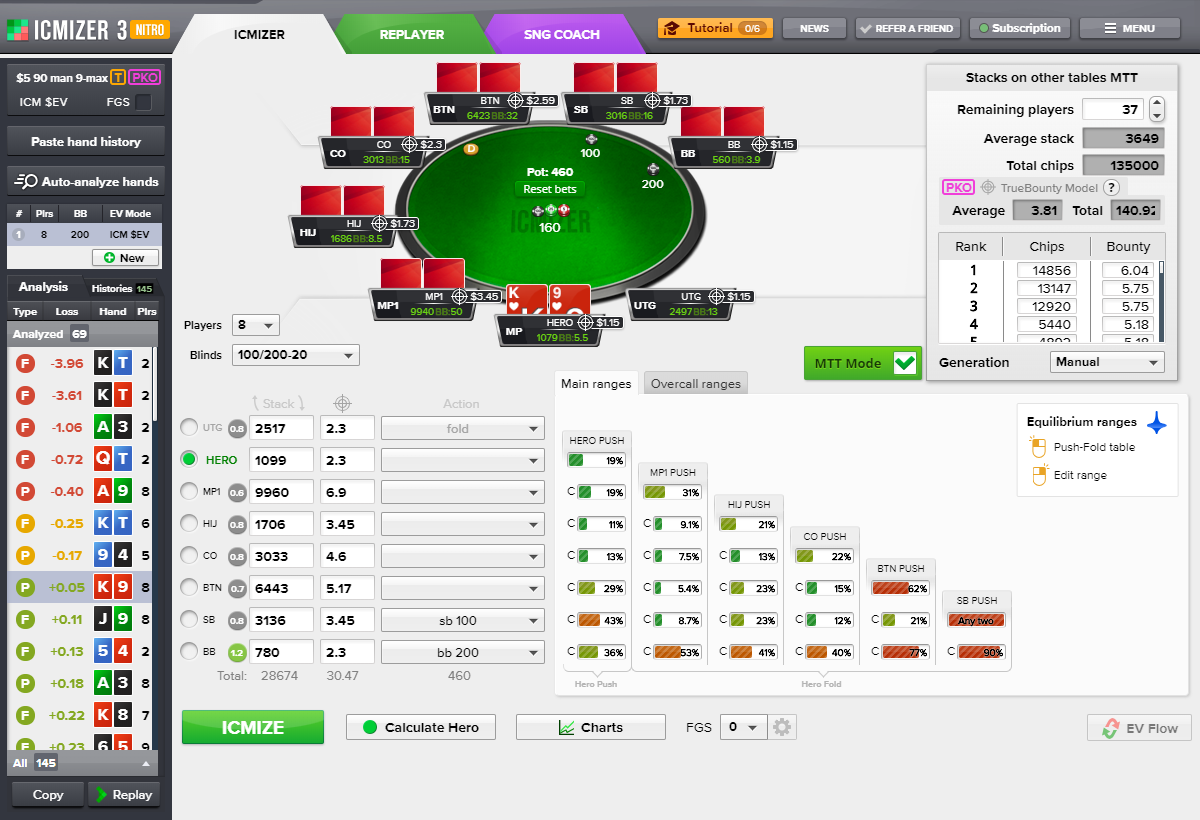 Note also that the calculations with MTT mode disabled are quite different: –$0.08 versus +$0.05 when it is enabled.

Because МТТs are usually played out evenly, the average stack size (and the average bounty for a progressive knockout tournament) in the MTT control window should be close to the values at our table. If they aren’t, this can lead to inaccurate and abnormal calculation results.

Consider this example. There are two tables remaining in an МТТ, but all players at your table are short-stacked, while all the huge stacks are crowded at the other table. Obviously, the strategies at each table will differ drastically from what they would be in the much more common situation where the short stacks and the big stacks are more evenly divided between the last two tables.
One of the reasons for doing such calculations is described in our post “MTT ICM Calculator – How to Review MTT Bubble Hands”.

“In some cases when there are short stacks on other tables, short stacks on our table actually turn out to be medium stacks out of the remaining players, which too can influence our push or fold decision.”

The converse is true as well: when another table has some huge stacks, the stacks at our table become very short, which can lead to imbalances in the calculations.

ICMIZER has constructed a very narrow push range for the Hero – 6.5%, and recommends folding their hand, 66.

Let’s check what the МТТ control window shows us: 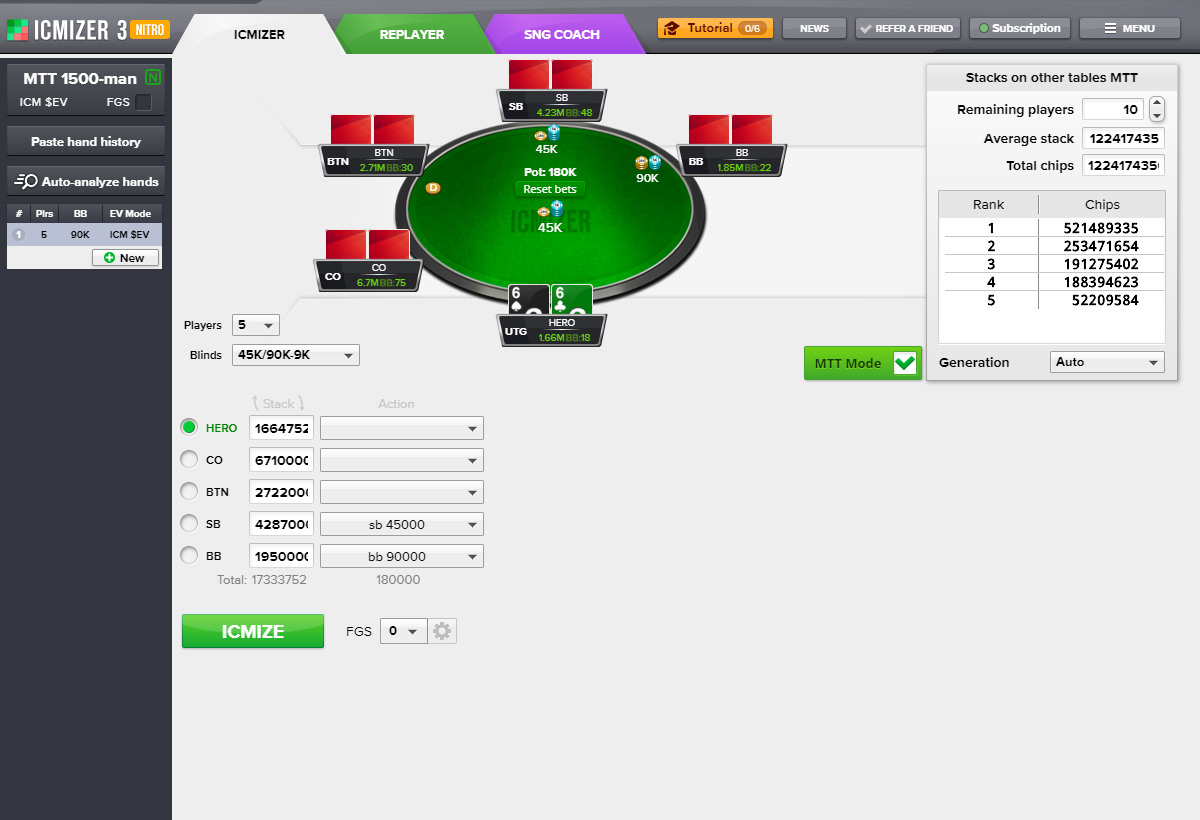 Let’s adjust the parameters of this hand to reflect the real situation, by adjusting the average stack size in this window. 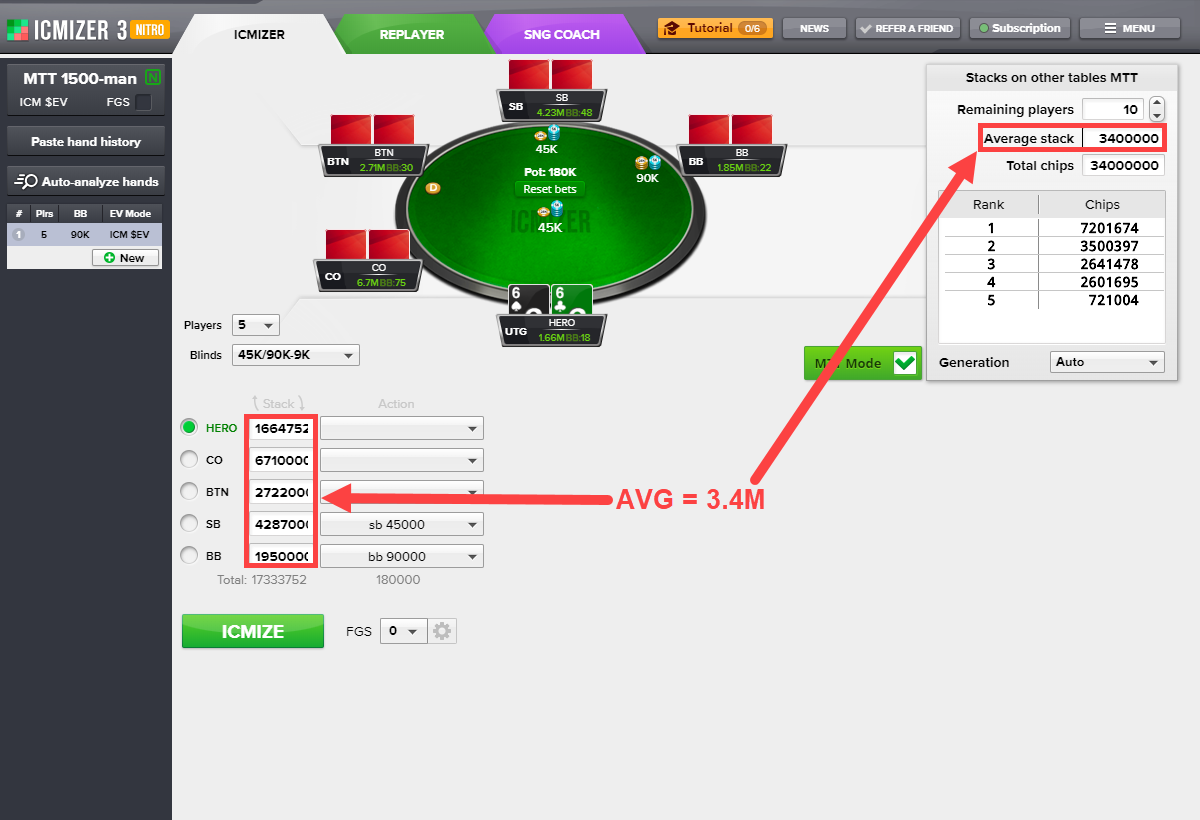 The new result we get is a lot more realistic: 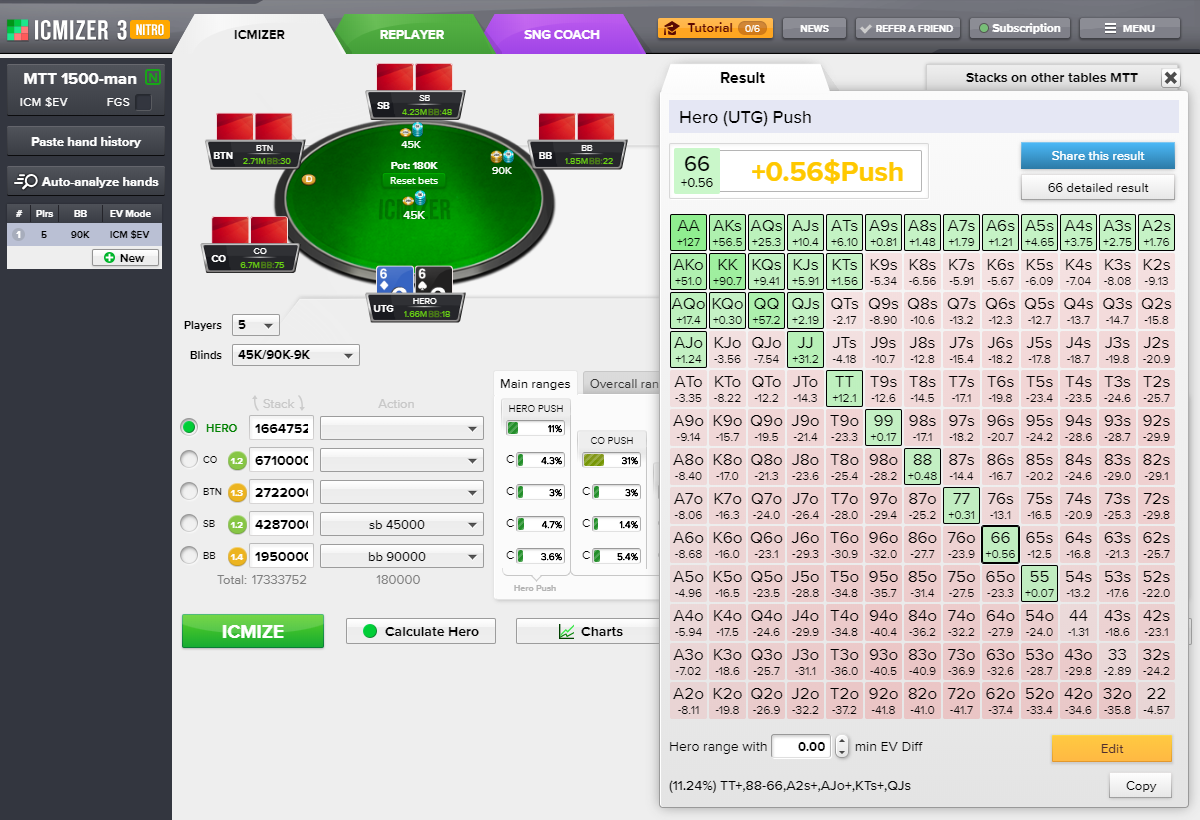 If an incomplete PKO tournament has been loaded into ICMIZER, or if the hands history from a PKO tournament is missing the bounty amounts, then you should manually enter the average bounty and the remaining knockout prize pool at the time of the hand. This can be done in the MTT control window. 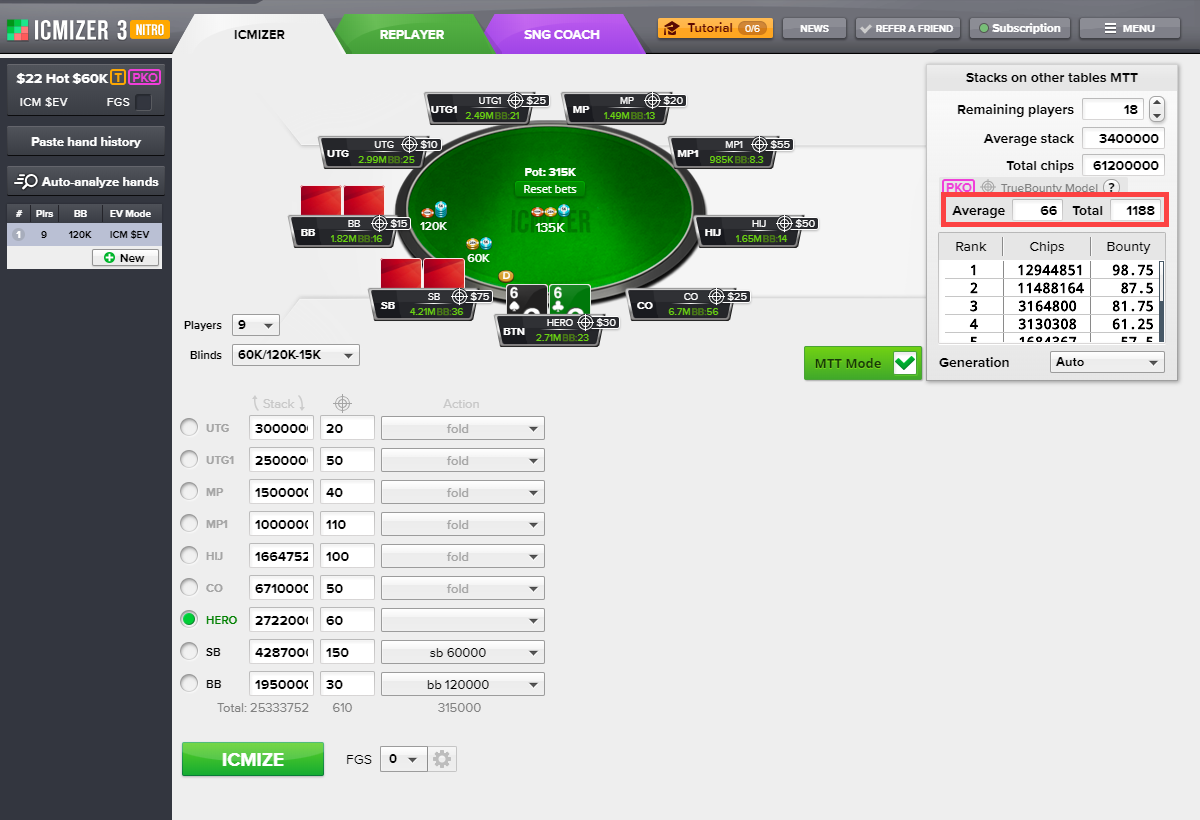 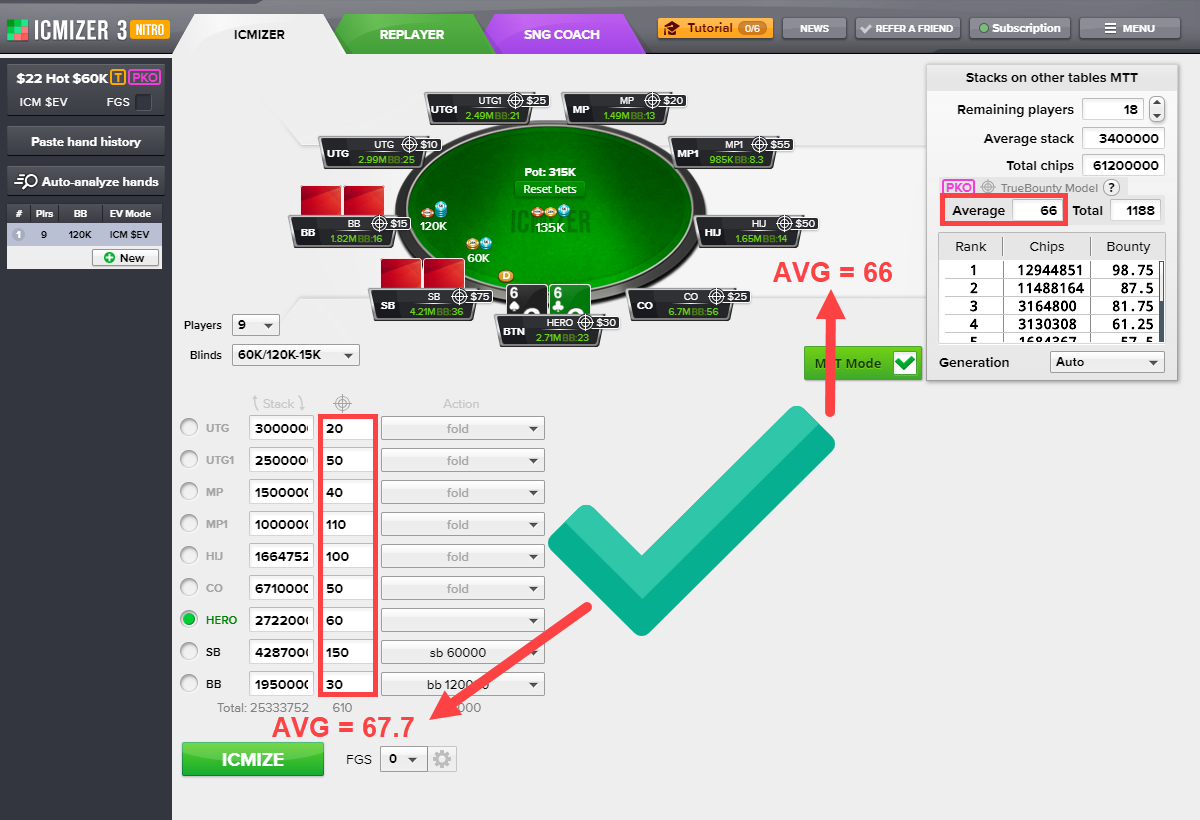 Sometimes users make the mistake of entering the total knockout prize pool in the Total box, which is actually meant for the remaining knockout prize pool at the time of the hand. If you enter the total instead, the average bounty amount across the tournament will increase and that will imbalance the bounties at the current table and at the other tables. 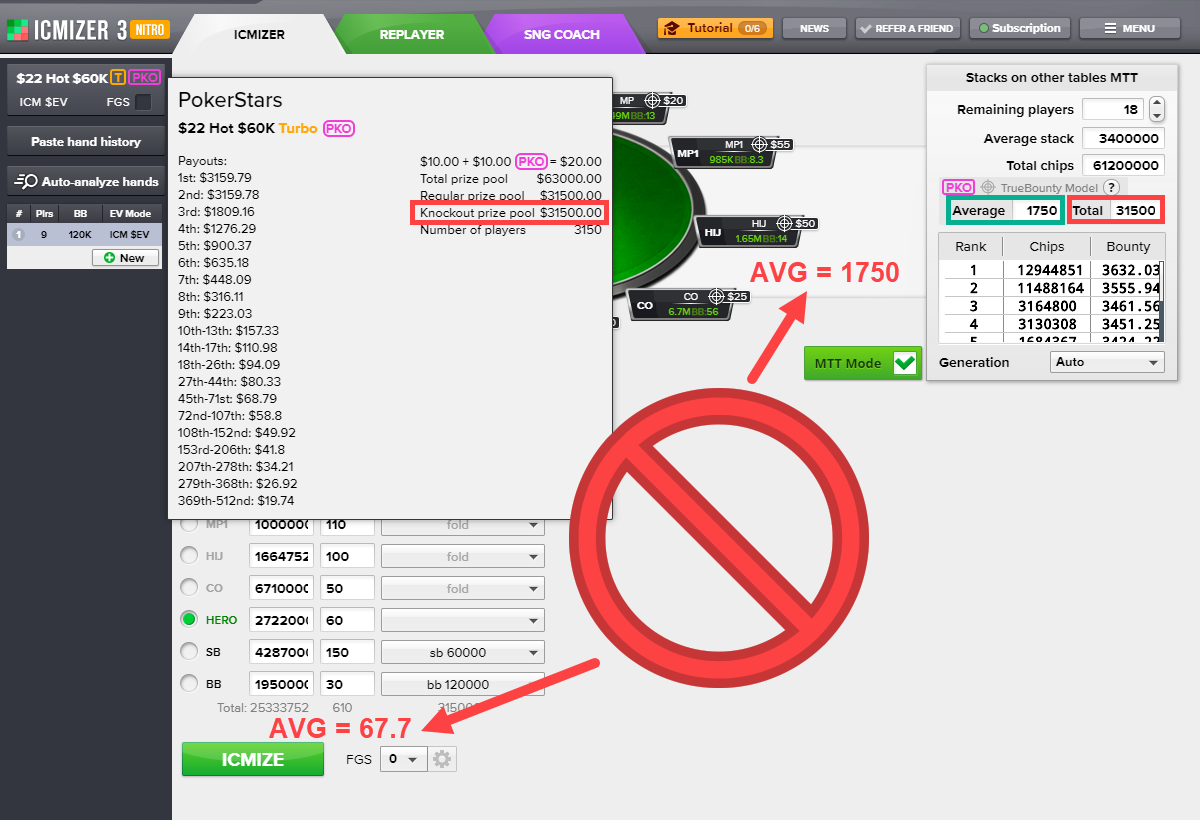 6. Not believing the results ICMIZER generates

In some situations, ICMIZER will show you unexpected results that may be hard to believe at first. Most of the time, there is a valid reason. Barring the pitfalls we’ve covered already, such unexpected results can well be explained by the specifics of the tournament structure or other parameters.

Here is an example: 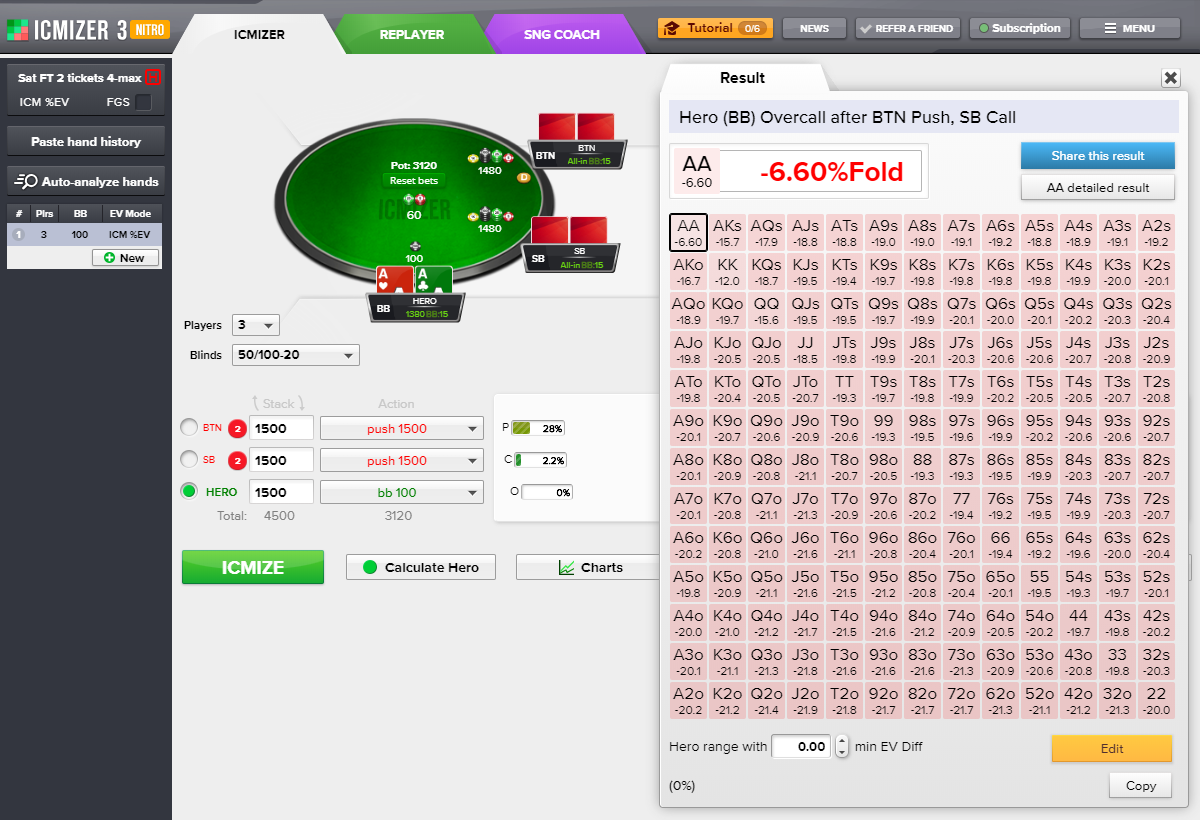 ICMIZER is advising us to fold any hand. This strange-looking recommendation is due to the tournament structure – Sat FT 2 tickets 4-max. This is a satellite tournament that finishes when two players remain, and both get the same prize regardless of their stacks. In our situation, the field is down to 3 players and 2 of them have gone all in.

According to the ICM model, which takes into account the tournament payouts, the Hero’s best strategy is to fold and watch as their opponents battle it out on the bubble. Whoever wins, the Hero will safely collect his ticket without risking coming in third. Yes, folding a hand like AA is obviously counterintuitive and it is different from the calculation you would get by using the Chip EV model, but is the most effective strategy nonetheless.

Here is one more bizarre-looking situation – ICMIZER tells us 55 is better than 88: 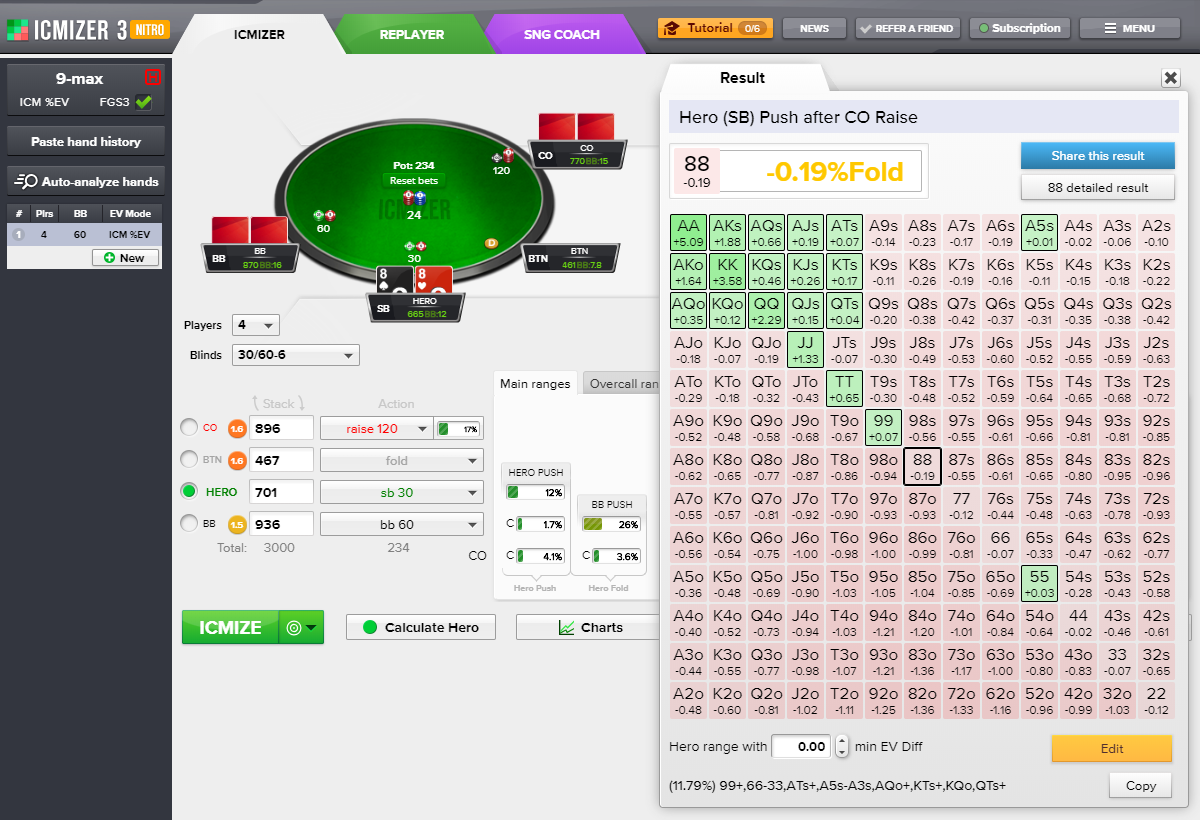 How is it possible that we should fold 88 but pushing with 55 is profitable? Let’s dig in and find out.

Preflop: the Hero is on the SB with 88 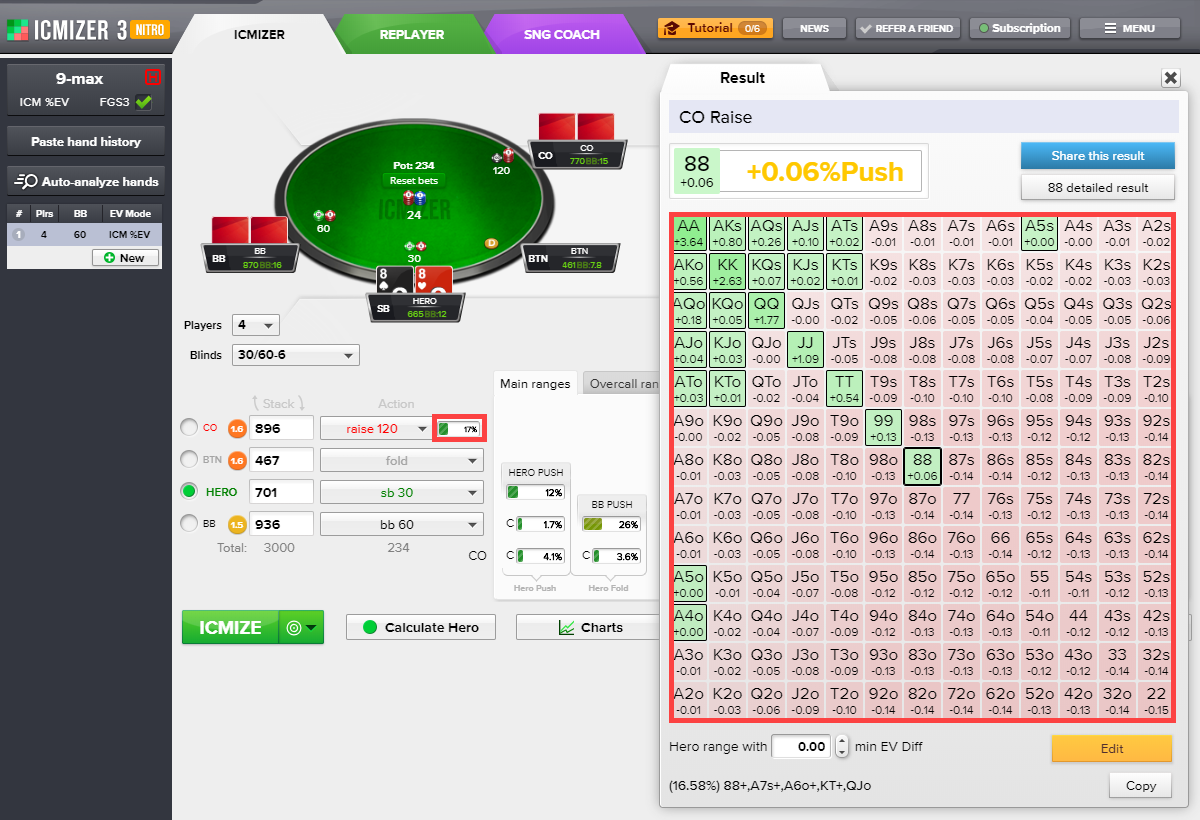 After the Hero pushes, their calling range is very strong at 4.1%: 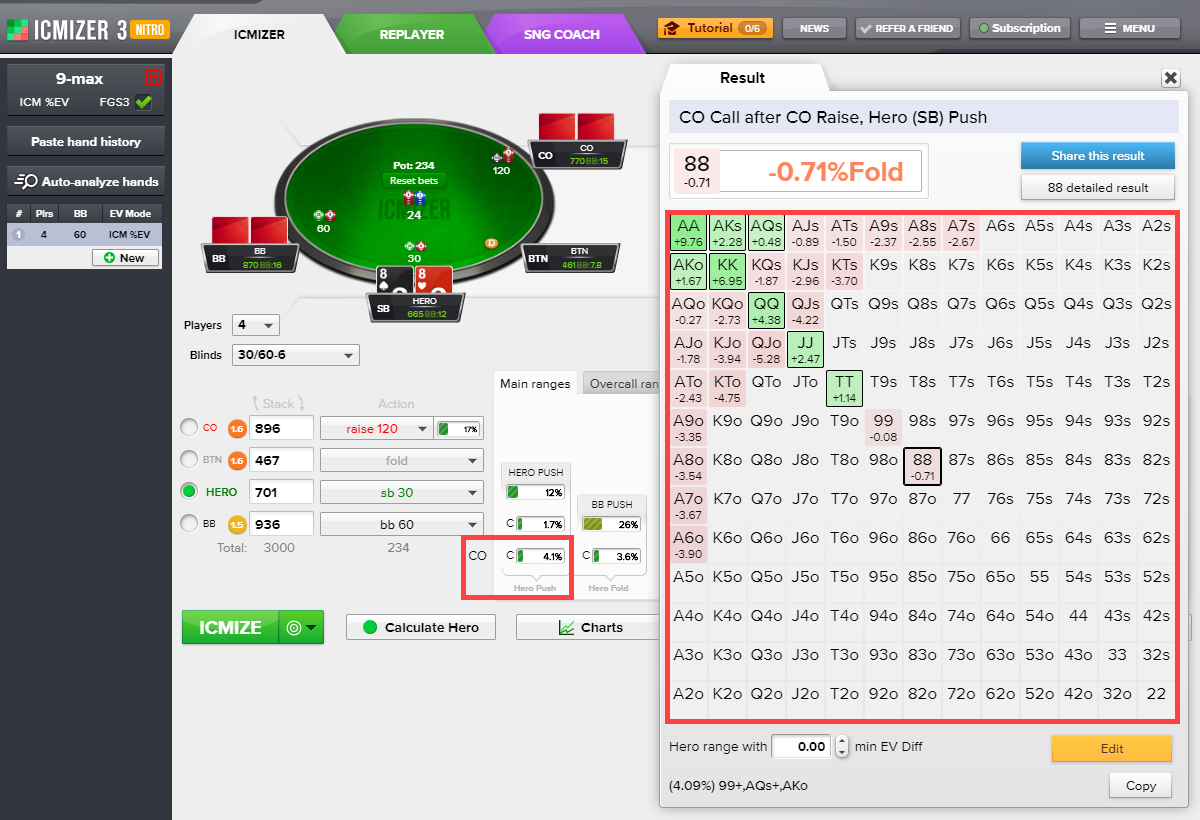 To understand what’s going on, we need to look at what factors are being considered when calculating the Hero’s pushing EV.

Let’s look into the details of the 88 hand: 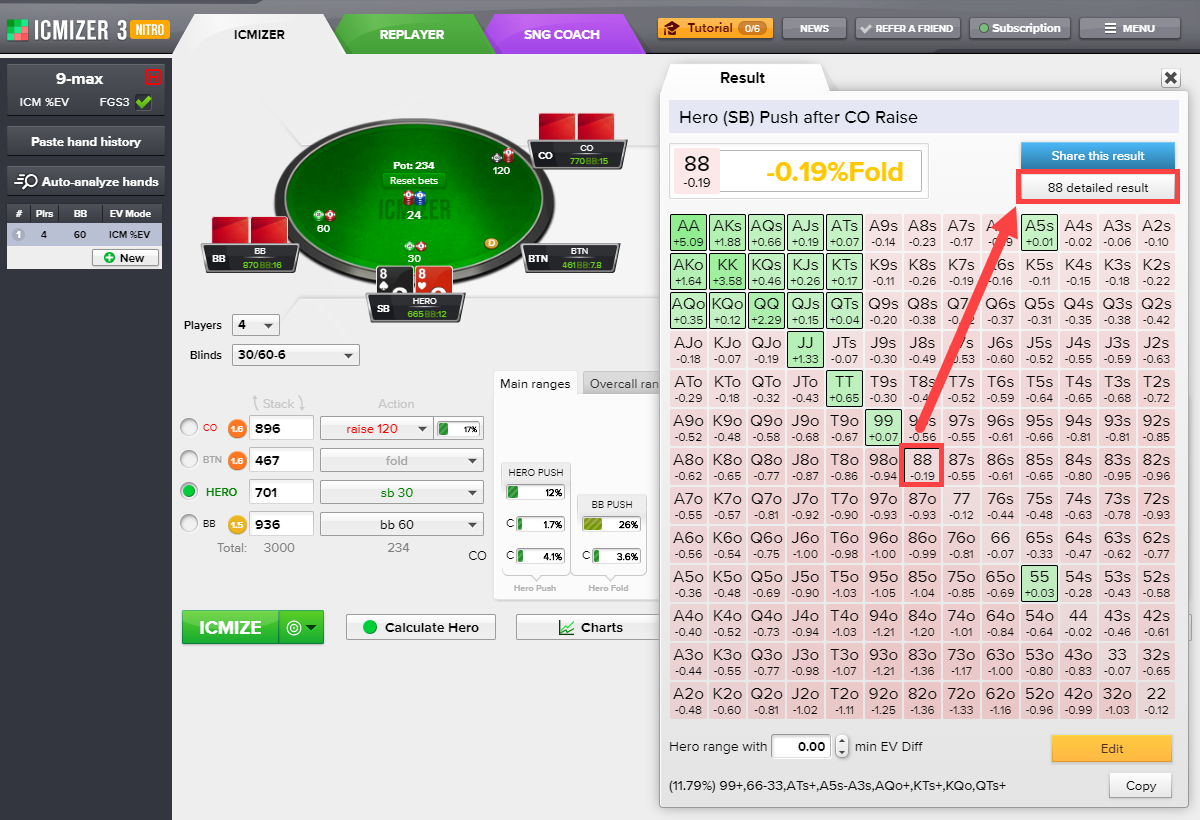 We see that when the Hero pushes, certain hand outcomes have certain probabilities.

Now let’s look at the details for the 55 hand: 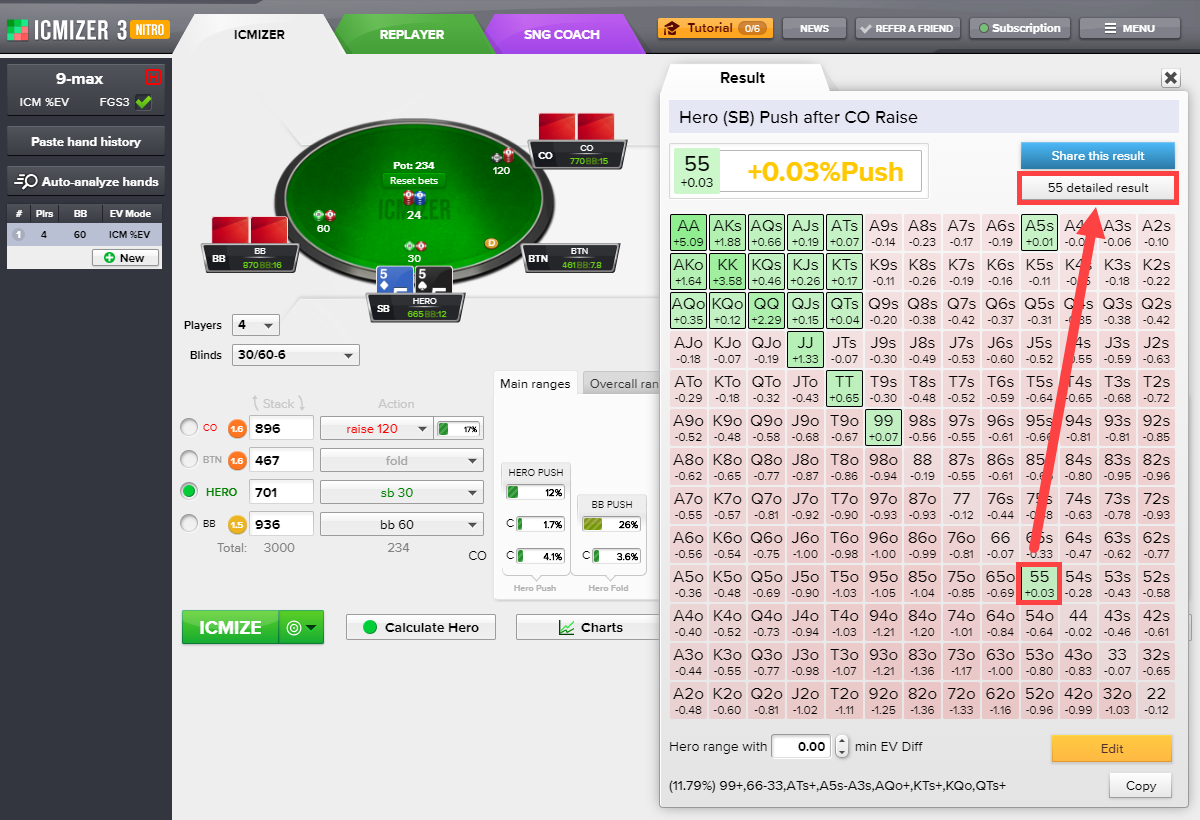 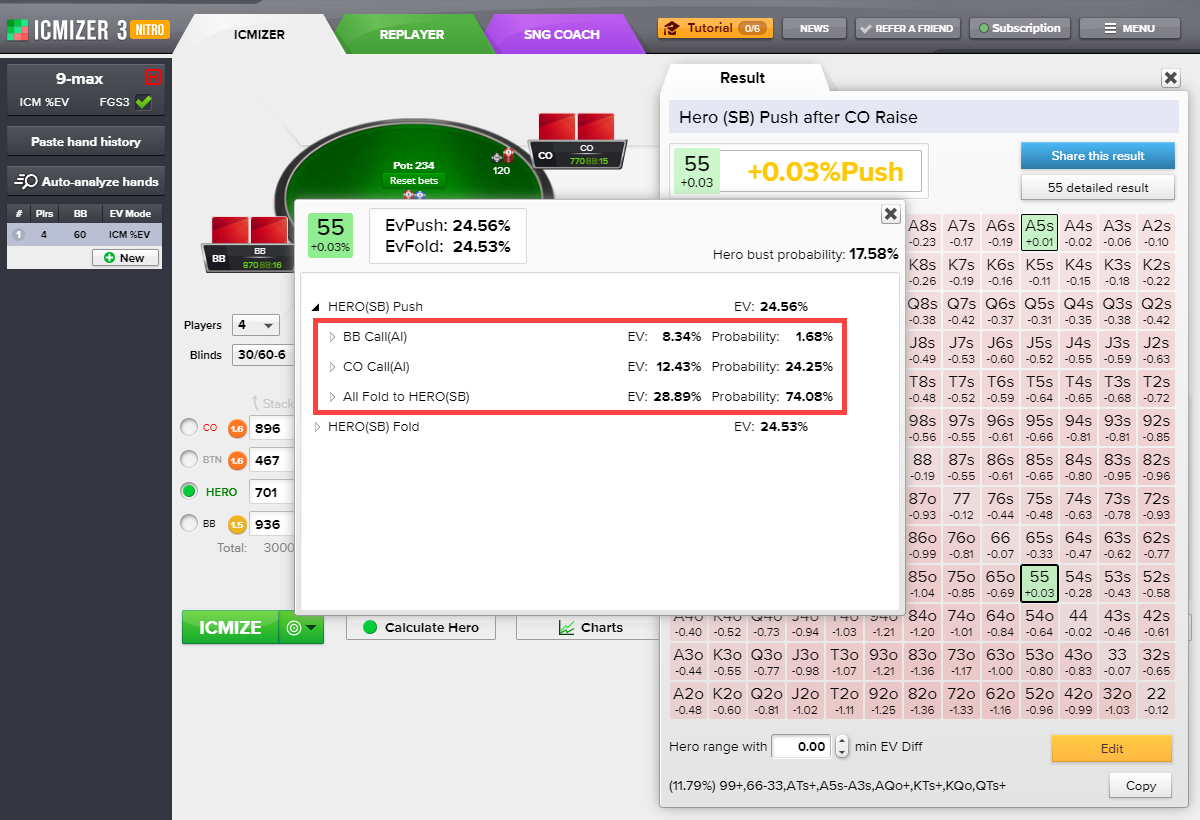 Look closely at the CO’s raising range, namely, the kinds of ace hands they open with. This range includes A6s+ and A6o+. But their calling range that includes aces only has AQs+ and AKo. In other words, the CO will likely not call with A6s-AJs or A6o-AQo. This means that if we want the CO to fold, we want them to have pocket hands like A6s-AJs or A6o-Aqo. But, when we have a hand like 77 or 88, this blocks those cards for the CO that would give them weaker hands like A7-A8, and thus decreases the chances of them folding. Whereas, if we have 55, those weaker ace hands are not blocked for the CO. That is why, in this particular situation, having pocket fives is better than having pocket eights.

Let’s see what happens if we remove the weaker aces from the CO’s raising range:

The situation has changed to resemble a normal one: 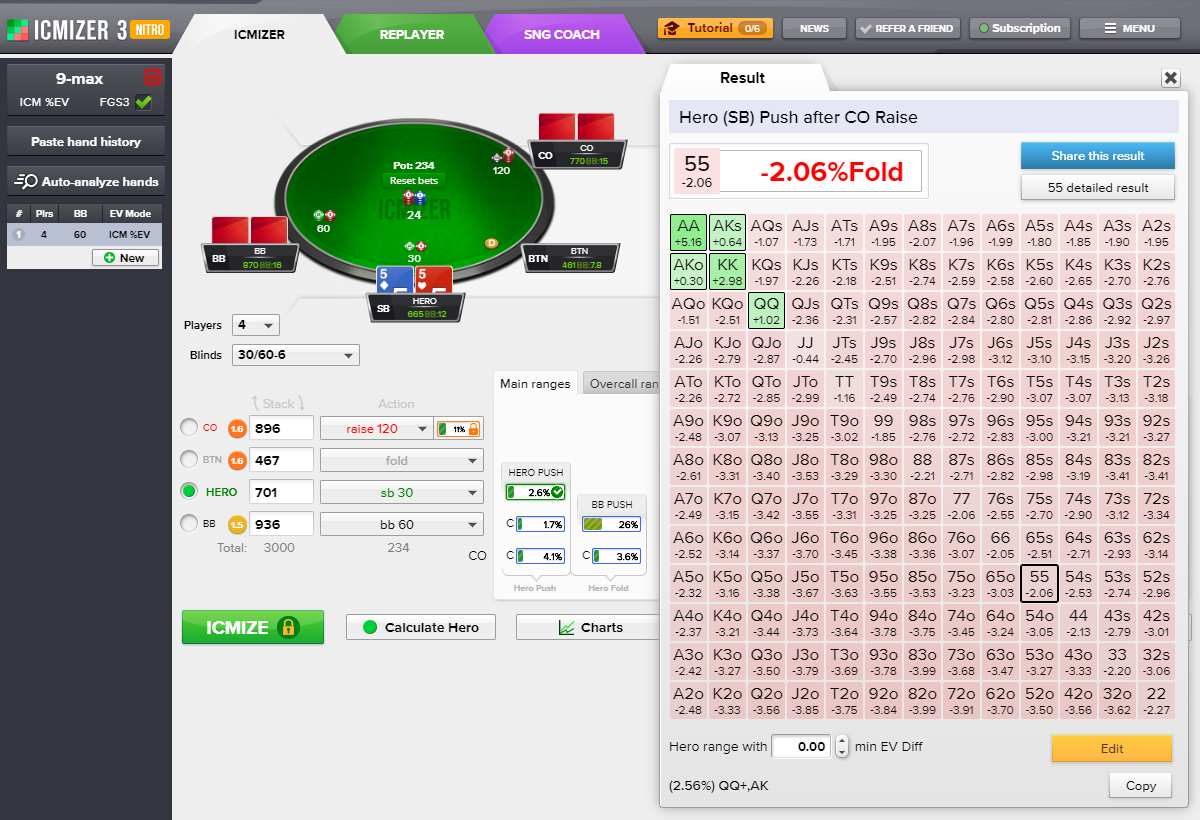