Grand Tour is the new poker format available on PokerStars. Behind tricky definitions and obscure phrases like "sprint" or "finish line" hides a 4-way fast-paced PKO (Progressive Knockout) tournament, with large blinds, the majority of hands played at the push/fold stage, and no classic prize pool.

All prizes are given for eliminations of other players, so the bounty prize pool is equal to the entire Grand Tour prize pool.

All Grand Tour tournaments have a 10% rake. This sounds big, but due to the rules as long as you keep winning your 4-way "races" you advance further without paying rake so the rake is paid for the course of several tournaments which may make these tournaments possible to beat to a professional player which is especially true at lower stakes.

Whether or not a 10% rake can be beaten at $25 or $60 stakes is not obvious and will depend on the number of weaker players entering these limits.

There are two types of bounty rules.

With the expected value of the immediate bounty in mind, these are played just like all other PKO tournaments with the standard 50/50 immediate/add-for-head ratio.

If the average bounty at the start of the tournament is more than $10.80, players get 60% added to their bounty and 20% + a lottery based percentage immediate bounty.

Note that while the immediate reward is randomized, the expected value of busting someone is 50% in $12 or less tournaments and 40% in tournaments with a bounty value greater than $10.80.

For tournaments with $10.80 or less average bounty:

For tournaments with $10.81 or more average bounty:

With the fast paced nature of these tournaments and a lot of push/fold preflop action, ICMIZER with its TrueBounty model for PKO tournaments is the right tool to craft a winning poker strategy for winning the sprint. 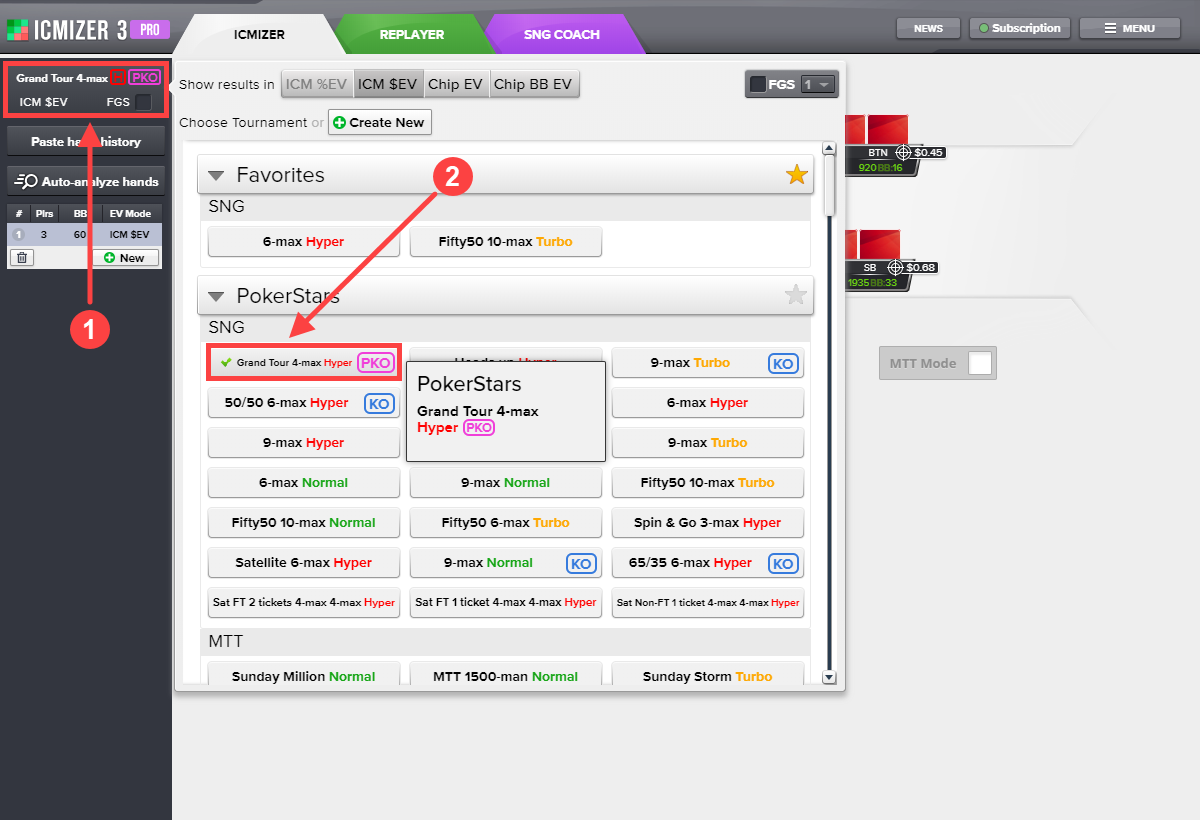 If you want to review a few hands or the whole tournament, click on ❶ the "Auto-analyze hands" button. Load hands or the tournament hand history file and ❷ select from the list ❸ the Grand Tour 4-max tournament structure. 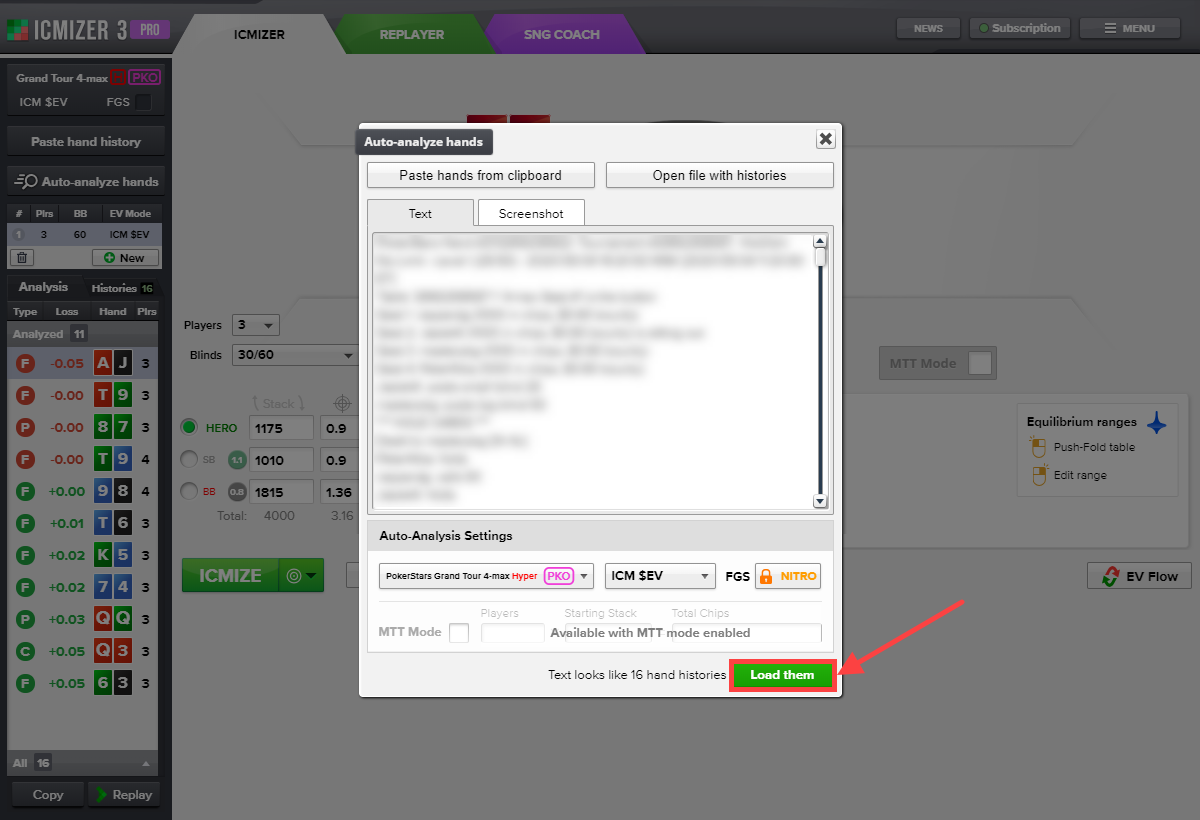 The loading of hands to the server will begin, and analysis then. The whole complex and time-consuming analysis process perform in the ICMIZER cloud without overloading your computer. ICMIZER 3 revises hands in seconds with the new, improved engine.

Then SNG Coach will ask you 15 starting questions to quickly test your skills to adapt initial question difficulty to your level for the selected tournament type. 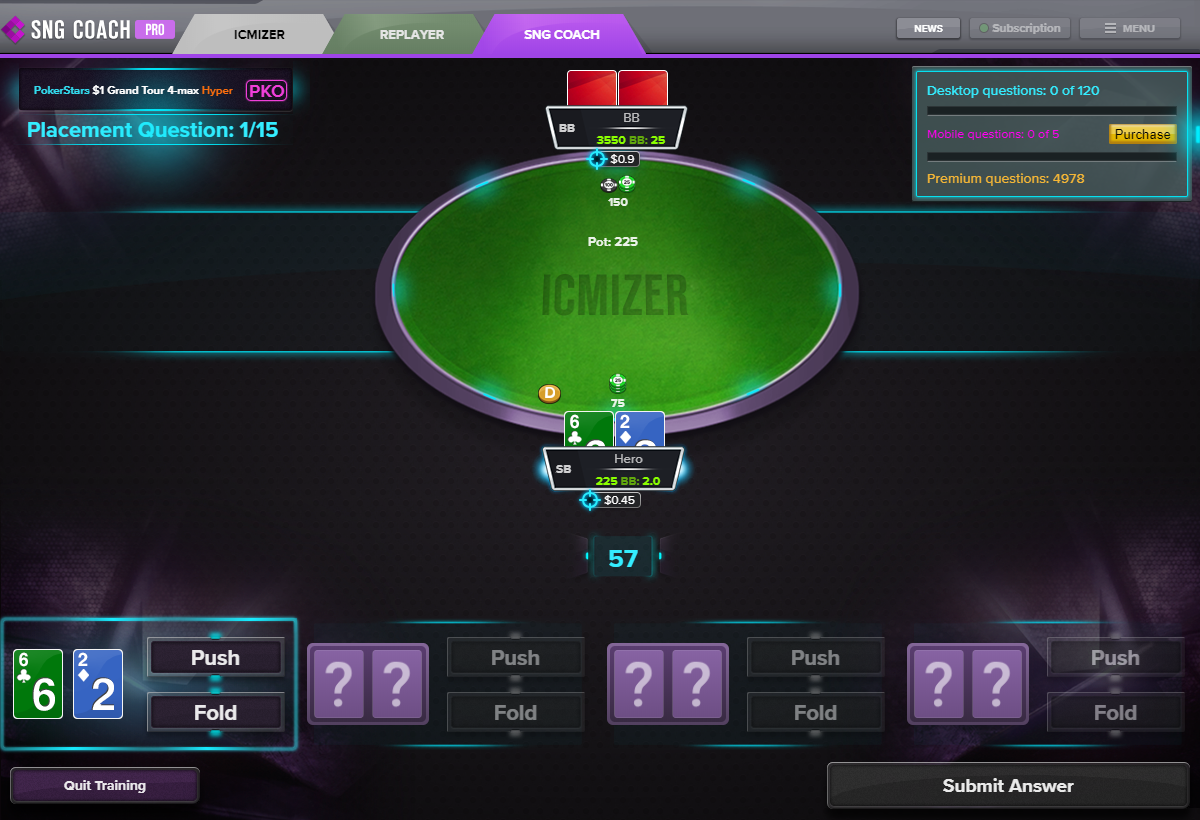 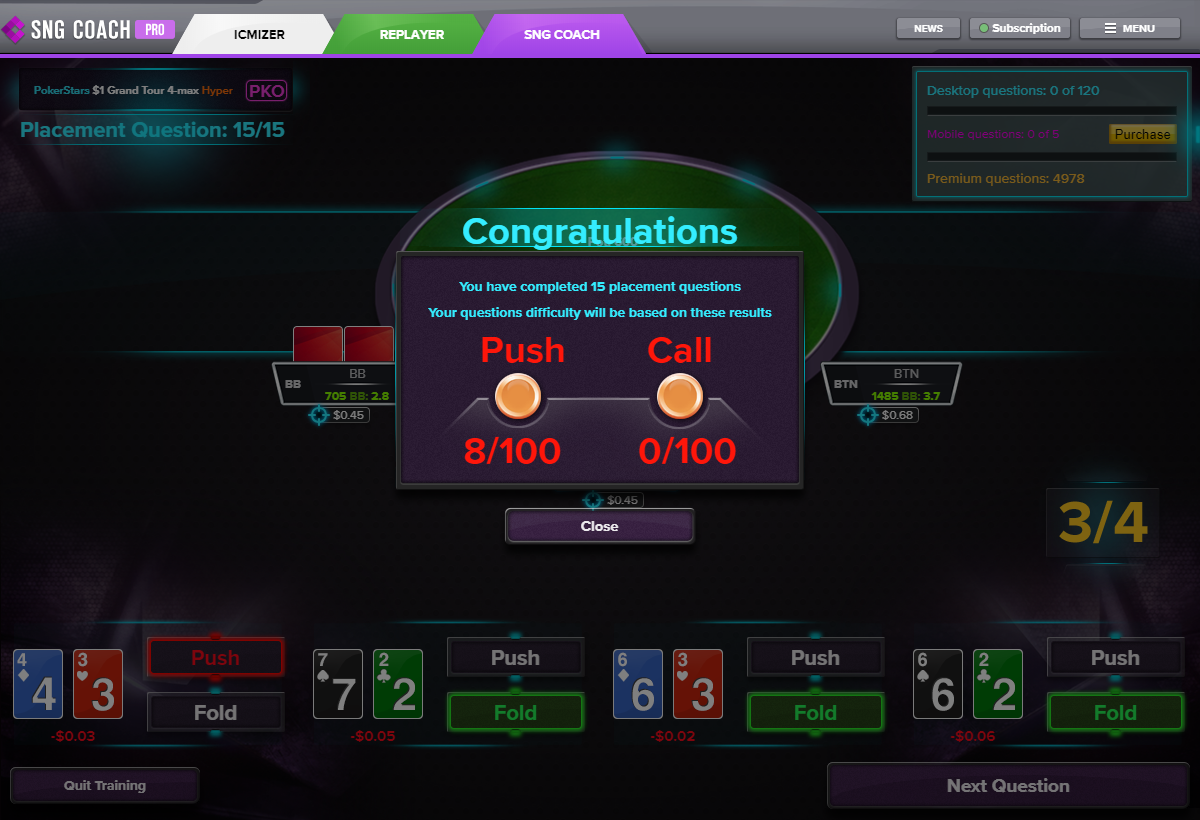 After that, you are able to train your skills in different Push/Fold contexts, based on:

Also, you can view a detailed assessment of your skills to decide what areas to focus on next.

ICMIZER 3 has detailed SNG Coach training settings, including blind level, positions, number of players at the table for all available tournament types. You can customize your training for getting more advantages in practicing Grand Tour tournaments. Click on the "Custom Quiz" button: 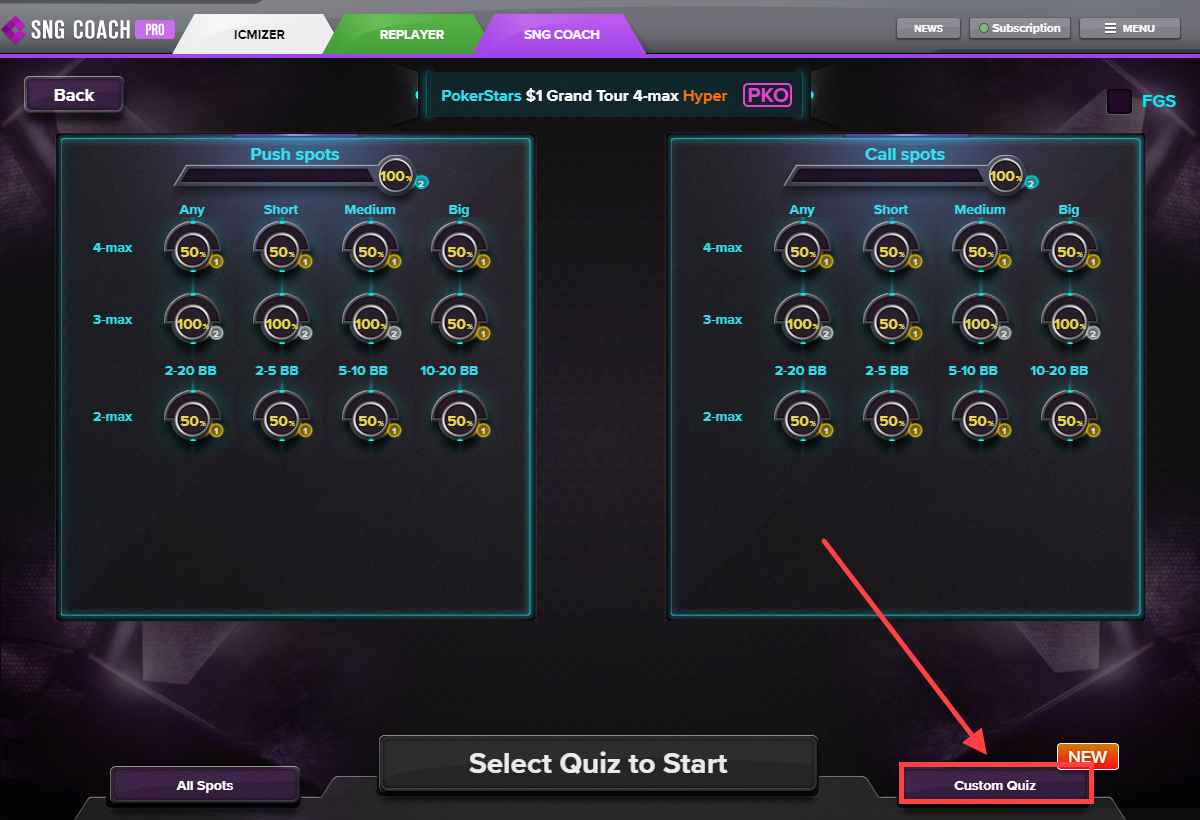 Set your training and start! 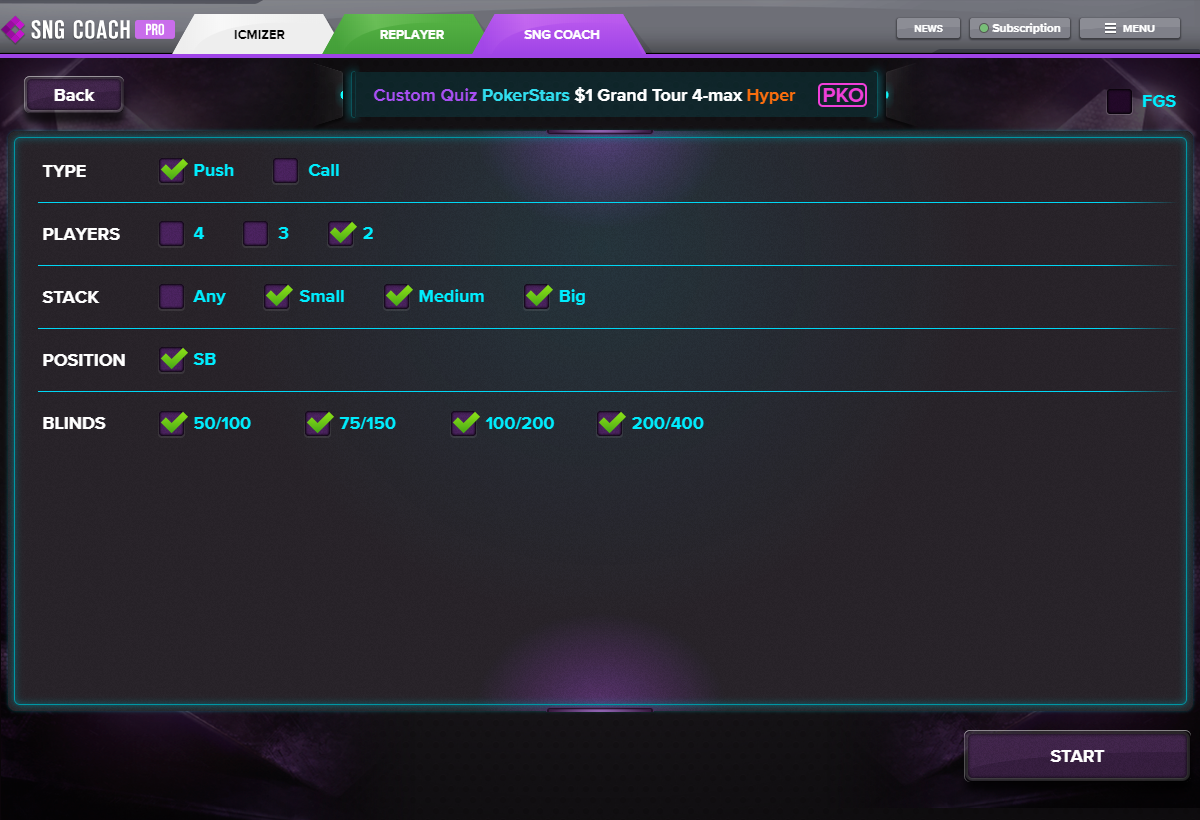